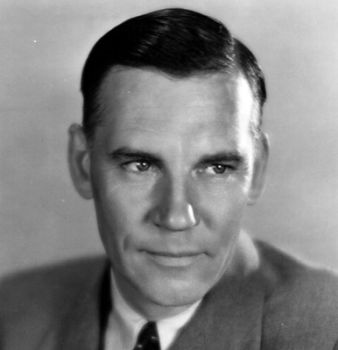 Walter Huston was a Canadian stage and movie actor who became one of the most respected performers in Hollywood. He was nominated unsuccessfully for three Academy Awards for his roles in the films Dodsworth (1936), All That Money Can Buy (1941) and Yankee Doodle Dandy(1942) and won his sole Oscar for his portrayal of gold prospector Howard in 1948’s 'The Treasure of the Sierra Madre'. The project was directed and written by his son, John Huston, who won Oscars for the film as well.

Walter was the head of an illustrious acting dynasty which has produced three generations of Academy Award winners: As well as Walter, his son John and granddaughter, Angelica also won an Oscar..

He was born Walter Thomas Houghston on April 5, 1883/4 in Toronto, Ontario. The family were well off, his father being a farmer who later founded a construction company. He had a brother and two sisters.

Walter was fascinated by the stage and vaudeville from an early age. After leaving school he joined a construction company whilst also attending in his spare time the Shaw School of Acting.

He made his stage debut, aged 18, in 1902. He began touring in 'In Convict Stripes', and also appeared with Richard Mansfield in 'Julius Caesar'. He again toured in another play 'The Sign of the Cross'.

In 1904, he gave up acting after his first marriage, to Rhea Gore, to work as a manager of electric power stations in Nevada, Missouri. The couple had a son, future director, John Huston, before divorcing in 1909. As his marriage was ending he returned to a professional acting career and worked in vaudeville where he met his second wife, Bayonne Whipple.

Bayonne was several years older than Walter and was an experienced vaudeville performer. The couple formed an act called "Whipple and Huston" and toured for fifteen years, dancing, singing and performing comedy. She handled the business side while Huston wrote most of the material. The marriage foundered as Huston's career in theatre and film grew, and Bayonne's did not. They divorced in 1931 after several years living apart.

In the same year Walter married actress Ninetta Sunderland. She would appear with him onstage three times - in 'Elmer the Great', 'Dodsworth', and 'Othello'. The marriage lasted until Walter's death in 1950.

Huston began his Broadway career on January 22, 1924 in 'Mr. Pitt'. It did well and led to several successful New York seasons for the actor in a variety of plays including 'Desire Under the Elms' in 1924, 'Kongo' in 1926, 'The Barker' in 1927, 'Elmer the Great' in 1928 and years later, in 1934, 'Dodsworth'. By the late 1920s he had made a name for himself as a reliable and accomplished stage actor and, with the arrival of Talkies, it was natural for him to make the transition into films.

In 1929, after several minor character roles he was cast in his first major film role as the villainous Trampas in the western 'The Virginian' with Gary Cooper. He played major roles in other early films such as 'Abraham Lincoln' in 1930, 'Rain' in 1932, crime classic 'The Beast of the City' with Jean Harlow also in 1932 and 'Gabriel Over the White House' in 1933.

Huston's finest screen performance came in 1936 when he played the title role in 'Dodsworth', directed by William Wyler. He received the first of his four Academy Award nominations for the role, which he had originated on Broadway in 1934. Huston's performance enhanced his already considerable reputation as an actor of great natural talent.

Lionel returned to his stage roots in 1937 for a three-week run in the title role of Shakespeare's 'Othello' and then in the following year in the musical comedy 'Knickerbocker Holiday'. Unusually, he achieved theatrical immortality by giving a poignant rendition of the show's top tune, "September Song,". It was immensely popular and even after his death 12 years later, his recording of it was regularly in the hit parade.

Walter continued to give memorable performances during the 1940s and received his second Best Actor Oscar nomination for his performance as Mr. Scratch in 'All That Money Can Buy' in 1941 and then he was nominated for Best Supporting Actor the following year for playing George M. Cohan's father in 'Yankee Doodle Dandy'.

He went on to win the Oscar for Best Supporting Actor in 1948 for his role as the old miner in 'The Treasure of the Sierra Madre' directed by his son. Walter’s final film was The Furies, co-starring Barbara Stanwyck, released in 1950.

1931
How I Play Golf, by Bobby Jones No. 7: 'The Spoon' (Short)
The Star Witness
The Ruling Voice
A House Divided

1946
Dragonwyck
Duel in the Sun

1948
The Treasure of the Sierra Madre
Summer Holiday