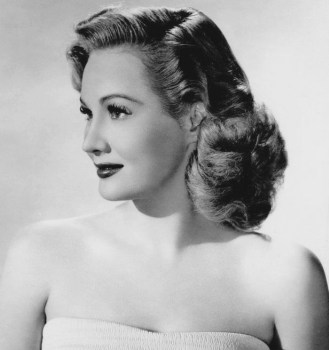 Virginia Mayo was an American movie and stage actress who became well known during the 1940's and 1950's. She appeared in a number of classic movies including 'The Best Years of Our Lives' in 1946 and 'White Heat' in 1949, as well as starring in stage productions and appearing many times on television.

She was born Virginia Clara Jones on November 30, 1920, in St. Louis, Missouri. Her father was a journalist and the family were comfortably off. Virginia was an outgoing little girl and became interested in dance and theater when very young. One of her aunts ran a dancing school in St Louis and Virginia began taking lessons there at the age of six.

She attended Soldan High School in St Louis and graduated in early 1938. Within a few months of graduation she made her professional stage debut, appearing in the chorus of the St. Louis Municipal Opera. This led to an offer from her brother-in-law, Andy Mayo, to appear with him as foil to to his pantomime horse vaudeville act which he performed with his partner, Nonnie Morton. She toured with Morton and Mayo for three years during which time she changed her name to Virginia Mayo.

During this period she made useful contacts and in 1941 she was chosen for the cast of a Broadway production, 'Banjo Eyes' starring top performer Eddie Cantor. It was the break she needed. Her beauty and skill were noted by a Hollywood talent scout and she was signed up to a movie contract with independent producer, Sam Goldwyn.

Goldwyn gave her her movie debut in ‘Jack London’ in 1943, alongside a young Susan Hayward. The movie was not a success but it got Virginia noticed and the following year she was given a much bigger role co-starring with Bob Hope in ‘The Princess and the Pirate’. The movie was well received and Virginia was launched as an up and coming star.

In 1945 she appeared with another top comedian, Danny Kaye in 'Wonder Man’ and the following year she cemented her reputation as a bright young, up-and-coming actress when she again appeared with Kaye in ‘The Kid from Brooklyn’.

The Best Years of Our Lives

Later in 1946 Virginia was selected to play in ‘The Best Years of Our Lives’, a William Wyler-directed movie which was destined to become a classic. The movie describes the return to civilian life of four servicemen. Virginia played Marie Derry, the wife of one of the servicemen, Fred Derry, played by Dana Andrews and she performed well in the role of the bitchy wife. The movie was a massive hit and confirmed Virginia's position as a top Hollywood actress.

The roles came thick and fast for Virginia over the next decade in such films as 'The Secret Life of Walter Mitty' in 1947, again with Danny Kaye, and ' White Heat' in 1949, another classic movie, this time co-starring James Cagney. In the same year she again received rave reviews co-starring with George Raft in the film-noir, ' Red Light'.

Her successes continued during the early1950's when she starred with many of Hollywood's leading men such as Burt Lancaster in 'The Flame and the Arrow' in 1950, Gregory Peck in 'Captain Horatio Hornblower' in 1951 and Rex Harrison in 'King Richard and the Crusaders' in 1954. Also in 1954 she was Paul Newman's first leading lady in 'The Silver Chalice'.

Towards the end of the 1950's, Virginia's career began to slow down as younger actresses began to appear. She appeared in a number of very average movies such as 'Congo Crossing' in 1956, and 'Westbound' and 'Jet Over the Atlantic' in 1959 and had just four roles each in the 1960's and 1970's. Her last movie was the disappointing 'The Man Next Door' in 1997.

As Virginia's movie career slowed, so her television career picked up. Her first TV appearance was in the 'Conflict' series in 1957 and she made regular appearances for the rest of her life in programs such as 'Wagon Train', ‘Lux Playhouse’, 'Burke's Law' and 'Night Gallery'. She also became well known for her featured appearances on 'The Love Boat', 'Murder She Wrote', 'Remington Steele', and as Peaches Delight in regular appearances on the daytime TV show, 'Santa Barbara'.

Virginia was married to actor Michael O’Shea, whom she met on the set of ‘Jack London’ in 1943. The two wed in 1947 and settled in Thousand Oaks, California. They had one daughter, born in 1953.

Virginia Mayo died on January 17, 2005, in Thousand Oaks, of congestive heart failure brought on by pneumonia. She was 84 years old.

1946
The Kid from Brooklyn
The Best Years of Our Lives

1947
Out of the Blue
The Secret Life of Walter Mitty

1950
Backfire
The Flame and the Arrow
Fine and Dandy

1952
She's Working Her Way Through College
The Iron Mistress

1954
King Richard and the Crusaders
The Silver Chalice

1955
Pearl of the South Pacific

1956
The Proud Ones
Great Day in the Morning
Congo Crossing

1957
Stampeded
The Story of Mankind
The Tall Stranger

1959
Westbound
Jet Over the Atlantic

1961
Revolt of the Mercenaries