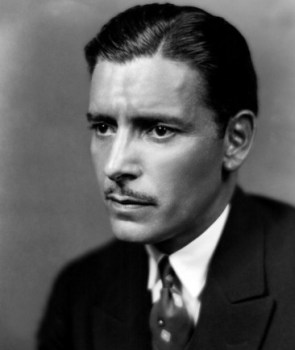 Ronald Colman was an English actor who began his film career in silent movies but who achieved great fame and popularity after the advent of Sound, and became one of the foremost leading men of the 1930's and 1940's. He starred in a number of classic films such as 'A Tale of Two Cities' in 1935 and 'Lost Horizon' in 1937, and was nominated four times for the Academy Award for Best Actor, winning for his performance in 'A Double Life' in 1947.

He was born Ronald Charles Colman on 9 February, 1891 in Richmond, Surrey in south-east England. He had one elder brother and two elder sisters. His father, Charles, was a silk merchant and Ronald and his siblings had a comfortable upbringing. Ronald attended Hadley boarding school in Littlehampton, Sussex, and intended to go on to Cambridge University to study engineering.

His plans changed dramatically after 1907 when his father died when Ronald was sixteen, and when he left school in 1909 he had to go to work to contribute to the family finances. He worked for five years in the accounts department of the British Steamship Company. During this time he developed a love for acting and the theater and performed in various shows for the local Amateur Dramatic Society. He also joined the London Scottish Regiment as a part time Territorial soldier.

In August. 1914, at the outbreak of the First World War, Colman enlisted with the London Scottish as a full time soldier and was almost immediately sent to France, but his war did not last long. In October, 1914 at the first Battle of Messines, he was hit in the leg by shrapnel and invalided home. He recovered after a period on crutches but for the rest of his life he walked with a slight limp.

Upon his recovery he made the decision to make acting his career. He entered his name in the London Casting Bureau and made his debut in 1916 at the London Coliseum in 'The Maharani of Arakan'. He continued to appear in a variety of roles, becoming increasingly well known. The future stage diva, Gladys Cooper, was at the time co-manager of the Playhouse Theatre in London and she recognised quality in the good looking but inexperienced young actor and gave him roles in many productions at the theater. He worked with great actors such as Gerald du Maurier and his time at the Playhouse proved an invaluable apprenticeship.

Colman began his movie career in 1917 in a comedy short 'The Live Wire' and for three years he continued making films, in addition to his stage appearances, enjoying the extra income it provided. His first feature film appearance was in 'The Toilers' in 1919, filmed in Cornwall. He also worked on numerous occasions with director Cecil Hepworth, an early British film pioneer, at his Walton-on-Thames studios.

With the future uncertain in postwar-depressed England, Colman made the decision to travel to America to improve his prospects and he arrived in New York in 1920. He was virtually penniless, without contacts and he found life very tough at first. He survived by taking menial jobs and by knocking on many doors in order to obtain a foothold in the fiercely competitive world of American acting.

Finally his hard work and obstinacy paid off and he began to get small parts in Broadway plays and in 1919 he went on tour with the Fay Bainter comedy 'East is West'. He achieved more recognition in 1921 with a starring role in the long Broadway run of the hit melodrama, 'The Green Goddess' and in 1923 his future career was assured when he was offered a movie role in 'The White Sister', co-starring Lillian Gish, one of the top stars of the Silent era.

The success of 'The White Sister' and the succeeding romantic movies he made in 1924 such as 'Her Night of Romance' and 'Romola', again with Gish, made Colman one of the most popular leading men of the time. He was paired with some of Hollywood's most popular actresses and his stage career was virtually abandoned. In May 1924 he signed a contract with independent producer, Sam Goldwyn, and went on to make 18 movies with him over the next decade.

Colman's good looks, athleticism and natural acting style ideally suited him to a variety of genres such as adventure films and dramas as well as romances and he had some notable Silent successes such as 'The Dark Angel' in 1925, the first version of 'Stella Dallas' in 1926 and, particularly, 'Beau Geste' in 1927, which became one of the top money-makers of the silent movies era.

In the last years of Silent movies Colman made a number of particularly successful films with the Hungarian-born actress Vilma Banky, including 'The Winning of Barbara Worth' in 1926, 'The Night of Love' and 'The Magic Flame' the following year and 'Two Lovers' in 1928.

Colman's career took on a new dimension with the introduction of sound in movies and his beautifully modulated stage-trained voice could be heard on screen for the first time. His first sound film was 'Bulldog Drummond' in 1929 for which he received a nomination for the Best Actor Academy Award. In the same year he was also nominated for the same Award for his performance in 'Condemned'.

After two poorly received movies, 'Lucky Partners' in 1940 with Ginger Rogers and 'My Life with Caroline' the following year, Colman immersed himself in working for the British War Relief, with many radio appearances and making bond tours across America. During this, in 1942 he made two movies, 'The Talk of the Town' and 'Random Harvest' which were major hits, and restored his pre-eminent position.

His career began to slow down from the mid 1940's as his age became a barrier to romantic leading man roles, but ironically it was at this time, in 1947, that he finally won a Best Actor Oscar for 'A Double Life', in which he gave a brilliant performance as a mentally ill actor.

Star of Radio and Television

As his movie career stalled, Colman moved on to the media of first radio and then television. From 1945 on he and his second wife, Benita Hume had appeared several times as guest stars on radio on 'The Jack Benny Program', which led to their own comedy radio show, 'The Halls of Ivy' from 1950-1952. The show then moved to television for a year from 1954 and he made occasional appearances on the small screen, guesting in programs such as Four Star Playhouse, The General Electric Theater, and Studio 57.

In the last years of his life Colman made two final screen appearances with a cameo in 'Around the World in Eighty Days' in 1956 and in 'The Story of Mankind' in 1957. With that his movie career ended. In the new world of James Dean and Marlon Brando, Colman's particular type of traditional, dignified Englishness appeared outdated.

Colman was married twice. His first wife was actress Thelma Raye whom he met whilst living in London. They married in 1918 but lived together only briefly before separating due to Thelma's jealousy of his increasing fame. In Hollywood his marriage was a closely guarded secret. Thelma pursued him relentlessly until he was able to pay her off and the marriage was finally dissolved in 1933. In 1935, during the filming of 'A Tale of Two Cities' Colman met actress Benita Hume. They married in 1938 and had a daughter, Juliet, and a happy marriage living on their San Ysidro ranch property, a marriage which lasted until his death.

Ronald Colman died on on May 19, 1958, from pneumonia, aged 67 years. He was buried at Santa Barbara Cemetery.

1920
A Son of David
Anna the Adventuress
Foolish Monte Carlo

1924
Twenty Dollars a Week
Tarnish
Her Night of Romance
Romola

1926
Kiki
Beau Geste
The Winning of Barbara Worth

1927
The Night of Love
The Magic Flame

1937
Lost Horizon
The Prisoner of Zenda

1942
The Talk of the Town
Random Harvest