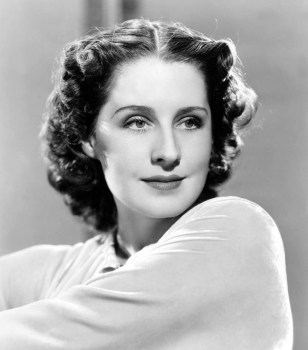 Norma Shearer was a Canadian actress who became one of the biggest Hollywood stars of the 1930's and was known as the "first lady of MGM". She was nominated six times for the Academy Award for Best Actress, winning once, for her role in 'The Divorcee' in 1930.

Her career started in the silent era and she easily made the transition to Talkies, aided by her brother Douglas, who was Recording Director at MGM. Norma and Douglas were the first Oscar-winning brother and sister.

Her "good girl" image at the start of her career in Silent Movies changed with a series of highly successful pre-Code, sexually liberated roles. After the Code began to be enforced she developed a more demure image and she appeared in period dramas and "prestige" pictures such as 'The Barretts of Wimpole Street' produced by her husband, the young MGM mogul, Irving Thalberg.

She has not been remembered as some of her contemporaries have but recently her career has been re-evaluated and celebrated as one of cinema's feminist pioneers: "the first American film actress to make it chic and acceptable to be single and not a virgin on screen".

She was born Edith Norma Shearer in Montreal, Canada on August 10, 1902, the youngest of three children. Her father owned a building company and Norma and her siblings had a privileged, happy upbringing. Norma's earliest ambition was to become a concert pianist until, when she was nine, she saw her first vaudeville concert, and she became fascinated by the stage.

In 1918 her life changed completely when her father's business failed and the family were plunged into poverty. Her parents separated and her older sister, Athole, who suffered from bipolar disorder, had a serious mental breakdown. Their mother, Edith, who had show business hopes for Norma, took Norma and her Athole, to New York where the fledgling movie business was then based and they rented a bleak, one room apartment.

Although the beautiful Norma was rejected by Florenz Ziegfeld for a role in his "Follies", she had no difficulty in finding work as a model. She also joined a casting agency and began receiving bit part work, her first appearance being with Athole in 'The Flapper' and 'The Restless Sex', both in 1920. Later in the same year she had another small role in D.W. Griffith's 'Way Down East'. She approached the great director for career advice but was firmly told she would never make a star even if she fixed the cast in her eye and had her teeth fixed.

Luckily, Norma was a very determined and self-confident young lady and she ignored Griffiths's advice, spending her savings on consultations with an ophthalmic surgeon who recommended a series of muscle-strengthening exercises for her eyes. She practiced the exercises for many hours in the years to come and succeeded in concealing the cast in her eyes. She began to haunt the theaters of Broadway, studying the work of top stage actresses of the day like Ina Claire and Lynn Fontanne. To help with the finances she increased her modeling work and spent many hours promoting household goods and auto tyres, getting the billboard name "Miss Lotta Miles".

In 1921 she at last got a speaking part in the 'B' movie 'The Stealers' and more roles in East Coast movies such as 'A Clouded Name' and 'Channing of the Northwest' followed. She began to make a name for herself and she came to the attention of Irving Thalberg, the young west coast producer who, when he joined Louis B. Mayer in 1923, gave Norma a five year contract to work in Hollywood. She was on her way.

After initial problems with screen tests, Shearer quickly learned how to conceal her out of focus eye under the strong white lights of the film studios and she began to get more prominent roles in a number of movies. After appearing with John Gilbert in 'The Wolf Man' in 1924 she became much better known and when Metro-Goldwyn-Mayer was formed in 1924 she was cast in the studio's first official production, 'He Who Gets Slapped'. She quickly became one of MGM's biggest box-office attractions appearing in popular productions such as 'Lady of the Night' (with her MGM future rival and nemesis, Joan Crawford,) and 'His Secretary', in 1925 and 'The Devil's Circus' the following year.

In her first four years under contract Norma appeared in thirteen silent movies for MGM, all of which were box-office hits. In 1927 she received her reward, firstly by being cast in her first big budget production, Ernst Lubitsch's 'The Student Prince in Old Heidelberg', and secondly, after converting to Judaism, she married her boss, Irving Thalberg in September, 1927. It is alleged that Louis B. Mayer had little regard for Shearer and would have dropped her were it not for Thalberg. Instead she rose swiftly, with her pick of films, parts and directors.

With the advent of talkies Norma was as determined as ever that her career would continue to flourish. Her brother, Douglas Shearer, was a leading player in the development of sound at MGM, and every care was taken to prepare Norma for the new Sound era. When she starred in MGM's first talkie, 'The Trial of Mary Dugan' in 1929, her medium pitched speaking voice was widely applauded and the film became a big hit.

Her follow up, 'The Last of Mrs. Cheyney', also released in 1929, was an even bigger hit and in 1930 Norma won her Best Actress Award for 'The Divorcee', adapted from Ursula Parrott's best-seller, "Ex-Wife." She continued with a run of highly successful and sexually provocative pre-Code films including 'Let Us Be Gay' in 1930, 'A Free Soul' and 'Private Lives' in 1931 and 'Riptide' in 1934. All were box-office hits, and placed Norma as one of MGM's top actresses along with Joan Crawford and Greta Garbo.

When the Production Code began to be enforced in 1934 she had to change her racy image and she began a run of "vanity" projects, protected by her husband from the realities of the commercial world. Of these, 'The Barretts of Wimpole Street' was the most successful. In 1936 she and Leslie Howard play the star-crossed lovers in 'Romeo and Juliet' for which she got her fifth Oscar nomination although the movie was her first to lose money. Similarly the budget of 'Marie Antoinette' in 1938 was too great for it to turn a profit although it was extremely popular with the public.

Irving Thalberg died in 1936, aged just 37, shortly after 'Romeo and Juliet' and Norma lost her protector. She went into seclusion for 18 months and wanted to retire, but was persuaded to make six more films for MGM. The best of these, and undoubtedly her finest career performance, was in the all-star, all-female comedy, 'The Women' in 1939, in which she triumphed amidst the stiffest competition from co-stars Joan Crawford, Rosalind Russell and Paulette Goddard.

She turned down the starring roles in 'Now Voyager' and 'Mrs. Miniver' in 1942 and in the same year she made her final film 'Her Cardboard Lover', which can kindly be described as not her best. She then finally retired from films and never returned.

Norma, by her own admission, was "ferociously ambitious", and through sheer determination and persistence, she overcame her eyesight defect. She had small eyes, which appeared crossed, due to a cast in her right eye. For most of her life she practiced corrective exercises to correct and hide the deficiency.

The dominant influence on Norma's career was her first husband, Irving Thalberg. It was her marriage to Thalberg, the "boy genius" of Hollywood which propelled her into the ranks of superstardom. Before her marriage she had many infatuations with her co-stars, and with director Victor Fleming, but she always seemed to be attracted to married men and the romances petered out.

With Thalberg she had two children, Irving Jr. (1930-1988) and Katherine (1935-2006). After Thalberg's death she had numerous affairs and her name was linked with James Stewart and Mickey Rooney, amongst others, and she had a long romance with George Raft which ended when he could not or would not get a divorce from his wife.

After her retirement Norma married Martin Arrougé, a former ski instructor twelve years her junior with whom she remained until her death. She withdrew from Hollywood public life and refused many requests to make a comeback. She was a wealthy woman after successfully fighting MGM and Louis B Mayer for Thalberg's share of the MGM profits.

1927
The Demi-Bride
After Midnight
The Student Prince

1928
The Latest from Paris
The Actress
A Lady of Chance

1929
The Trial of Mary Dugan
The Last of Mrs. Cheyney
Their Own Desire

1934
Riptide
The Barretts of Wimpole Street

1942
We Were Dancing
Her Cardboard Lover