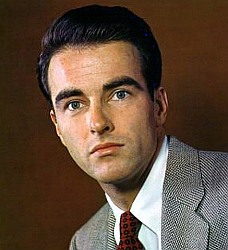 Montgomery Clift was an American movie actor who had a short but highly successful career before his early death in 1966. He was a forerunner of Marlon Brando and James Dean in playing beautiful, wounded, neurotics. He became known for the twitching of his cheek muscle to imply great passion beneath his sensitive, but frozen features.

He began a long theatrical apprenticeship on Broadway, aged just 15 and started his Hollywood movie career over 10 years later in 1948, with John Wayne in 'Red River'. In his movie career Clift was nominated four times for Academy acting awards, three for Best Actor and one for Best Supporting Actor, although winning none.

He was born Edward Montgomery Clift on October 17, 1920, in Omaha, Nebraska. He had a twin sister, Ethel and an older brother, Brooks, and his family were comfortably off. His father was a banker and his mother, Ethel, but known to everyone as Sunny, was the illegitimate daughter of two members of leading American political families - the Andersons and the Blairs. She was to spend most of her adult life trying to get recognition for herself and her children by these families as their offspring. As children Monty and his siblings were taken on several European trips by their mother, staying in the best hotels and being privately tutored. None of he children attended normal school until they were in their teens and Monty in particular fell academically badly behind other children of his own age.

The young Monty had a vivid imagination and from an early age took a delight in staging and acting in his own plays for his family. When he was 13 his mother signed him up as a photographic model and began taking him to auditions for acting roles. Within a year he was taken on in a summer stock production of the comedy 'Fly Away Home' and he took to it quite naturally, playing the part with such skill that he was kept on for the Broadway run of the play which began in January 1935. Later in the year he was cast in the smash hit Cole Porter musical 'Jubilee'.

For the next 10 years, Clift continued to build his reputation as a brilliant stage actor. Even when he appeared in unsuccessful productions his performance tended to attract rave reviews. His first major starring role was in 1938 in 'Dame Nature' and in 1940 he was cast in 'There Shall Be No Night', co-starring the formidable Alfred Lunt and Lynn Fontanne, who became close friends with the young actor. In 1942 he met former Broadway star Libby Holman who was to have a strong influence on his life. It was the principal heterosexual relationship of his life - he was predominantly gay - and she had a great influence on his future acting career.

After his appearance in Lillian Hellman's 'The Searching Wind' in 1944 Clift was hailed as Broadway's top young actor. He had been courted for years by Hollywood but was not willing to join the studio contract system. He finally made the change from stage to screen in 1946 when he co-starred with John Wayne in 'Red River' which was finally released two years later. Although the two actors did not get on, they formed a formidable, if unlikely screen partnership. Clift's long apprenticeship on Broadway had made him an accomplished actor, and he became known for his "Method" - the intensity with which he researched and dissected his roles.

In 1948 he played a sensitive G.I. in 'The Search' for which he won the first of four Academy Award nominations. From then on his parts were perfectly matched to his persona: the worthless would-be lover in 'The Heiress' in 1949, the upwardly mobile and ambitious killer in 'A Place in the Sun' in 1951, the priest suspected of murder in 'I Confess' and the soldier who goes AWOL rather than fight in the ring in 'From Here To Eternity', both in 1953.

A serious car accident in 1956 during the production of 'Raintree County' is often cited as the reason for his career downturn , but by then he had not made a movie for four years. He had turned down starring roles, on the advice of Libby Holman, in 'Sunset Boulevard' in 1950, (originally written specially for him), 'High Noon' in 1952 and 'East of Eden' in 1955.

In the last ten years of his life, Clift's Hollywood career slid disastrously. He applied hiself earnestly to a few literary, poetic, or serious pictures, such as his short but riveting appearance in 'Judgment at Nuremburg' in 1961 as a victim of Nazi persecution for which he was nominated for Best Supporting Actor, but he was beset by personal demons.

In 1962 he made 'Freud', a biopic on the life of Sigmund Freud, directed by John Huston, with whom he had worked the previous year on 'The Misfits', and who specifically asked for Clift for this film. There was friction between director and star from the start and during the shoot Clift had to rush to London for urgent medical diagnosis when he thought he was going blind due to cataracts. The movie went way over budget and Universal finally lost patience and sued Clift for the cost of the film's production delays. There was much negative publicity and claims and counterclaims were made in court and the news of Clift's drink and health problems now became public knowledge.

'Freud', ironically, was a great success but the subsequent legal problems accelerated Clift's downward spiral and he found good roles harder to come by. By the mid 1960's he was considered to be virtually unemployable.

Offscreen Clift was a sadly troubled individual. For all his life he was dominated by a series of strong females, first his controlling mother, then Libby Holman and then by several close actress friends such as Nancy Walker, Ann Lincoln and Elizabeth Taylor with whom he appeared in three movies, 'A Place in the Sun', 'Raintree County' and 'Suddenly, Last Summer'. He had long term health problems, suffering from dysentery and colitis for much of his career, and was rejected by the army in WWII for chronic diarrhea. After the war he became increasingly dependent on pills and alcohol and developed a reputation for mental instability and erratic behaviour.

His confusion over his sexuality resolved itself and by the mid 1950's he was exclusively homosexual but he spent much time and money on psychiatrists. The drinking and substance abuse continued and more friends, including Libby Holman, were turning their backs on him as he gradually became ostracized by the Hollywood social set.

Montgomery Clift died on July 23, 1966, aged 45, from occlusive cornoary artery disease. He was buried in a Quaker cemetery in New York. He achieved much in his life, but fell short of greatness. His death has been described as "the longest suicide in history."

1953
I Confess
Indiscretion
From Here to Eternity

1961
The Misfits
Judgement at Nuremberg