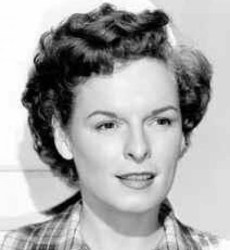 Mercedes McCambridge was an American radio, stage and movie actress who won an Oscar on her movie debut in 'All the King's Men' in 1949 but who did not appear on screen at all in her best known film performance - as the voice of the demon in 'The Exorcist in 1973. Her movie career was short but highly successful with a second Best Supporting Oscar nomination for her role in 'Giant' in 1956.

Her personal life was turbulent and her acting achievements were overshadowed by tragedy when her son committed suicide in 1987 after murdering his wife and two daughters. She had an alcohol problem for part of her life but overcame it and became a highly vocal campaigner against alcoholism.

She was born Carlotta Mercedes McCambridge on March 16, 1916, in Joliet, Illinois into a poor Irish-American Catholic farming family. Her Spanish-sounding Christian names were the result of her mother's flair for melodrama, and not because of any Spanish lineage, and she was actually called "Mercy" by her family.

When her father received an inheritance he moved his family to South Chicago. From a young age Mercedes loved being the center of attention and often made up long stories to get the spotlight on her. After Loyola Catholic College in Chicago, she attended Mundelein College, Chicago, to study English and Theater and whilst there she began her performing career on radio, aged 19 in such shows as 'Lights Out' and the 'I Love A Mystery' series which ran for 10 years from 1939.

After marrying her first husband, William Fifield, in 1939 she moved, after a brief stay in Mexico, to Hollywood and then to New York where she became a full time professional radio performer, including starring in her own show, 'The Defense Attorney', and appearing in literally hundreds of other shows including 'Bulldog Drummond', 'Studio One' and 'Abie's Irish Rose' and working for two years with Orson Welles's "Ford Theater" radio program. She so impressed Welles that he called her "the world's greatest living radio actress".

In 1945 she made an inauspicious debut on the Broadway stage in 'A Place of Our Own' which closed after only eight shows and her next two Broadway plays, 'Woman Bites Dog' in 1946 and 'The Young and Fair' in 1948, were also unsuccessful, but her performances brought her to the attention of Hollywood. When 'The Young and Fair' opened on Broadwaym she withdrew after one week to leave for Hollywood to make her movie debut in 'All the King's Men'.

It was her big break playing Sadie Burke, the journalist who becomes involved with the rise and fall of a ruthless politician, played by Broderick Crawford. The film received a total of seven Academy Award nominations and won the Best Picture Oscar. Mercedes won the 1949 Academy Award for Best Supporting Actress for her performance. Surprisingly her movie career did not take off with this success. Columbia Pictures did not take up their option to sign Mercedes up to a long term contract on completion of filming. Consequently her next movies were 3 disappointing low budget 'B' films in 1951, 'Inside Straight', 'The Scarf', and 'Lightning Strikes Twice'. Part of her problem was that the studios just did not know how to use her. She was an amazingly strong screen presence but did not have conventional leading lady looks.

From the outset Mercedes had embraced the new medium of television and from 1950 onwards as well as continuing her radio career, she made regular appearances on the small screen in series such as 'Lux Video Theatre' from 1950 to 1952 and 'The Ford Television Theatre' in 1952 until her next movie appearance in 1954 in 'Johnny Guitar'. It was well worth waiting for. She plays Emma Small, a venomous and obsessive cowgirl who bitterly opposes the creation of a railroad into the town. Her scenes with Joan Crawford crackle with tension which was not all acting as the two women did not get on well off screen.

In 1956 Mercedes gained a second Best Supporting Actress nomination for her performance as Rock Hudson's domineering and jealous older sister in 'Giant' and the following year she had a small role in the disappointing 'A Farewell to Arms'. Nothing if not adaptable she appeared as the lesbian leader of a motorcycle gang supervising the rape of Janet Leigh in the Orson Welles classic 'A Touch of Evil' in 1958 and the following year she played the scheming mother of Elizabeth Taylor in 'Suddenly Last Summer'.

After two disappointing films in the early 1960's, 'Cimarron' in 1961 and 'Angel Baby' in 1963, Mercedes concentrated more on her stage career including 'Cages' and 'The Little Foxes' in 1963 and the last four months of a Broadway production of 'Who's Afraid of Virginia Woolf?', in 1964. She appeared in a wholly unsuccessful western called 'Run Home Slow' in 1965 and a thriller which did not thrill, 'The Counterfeit Killer' in 1969, but gradually her film career wound down until 1973 when she voiced the demon inside Linda Blair in 'The Exorcist'. It was a masterly performance at which Mercedes worked extremely hard and it is ironic that a film in which she does not appear is her most famous work. The film received ten Oscar nominations, including Best Supporting Actress for Blair. Apart from two poorly received movies in the late 1970's and a flop in 1983, this marked the end of Mercedes' movie career.

Through the 1960's and for the rest of her career Mercedes gradually made television her main acting outlet. She appeared on many shows including 'Rawhide', Bonanza', 'Dr. Kildare' and 'Bewitched' in the 1960's and 'Gun Law' and 'Charlie's Angels', in the 1970's and continuing in the 1980's with Magnum' and 'Cagney and Lacey'.

Mercedes never forgot her first love and she continued her successful stage career well into old age. In 1972 she was nominated for a Tony Award as Best Supporting Actress (Dramatic) for her performance in 'The Love Suicide at Schofield Barracks'. She returned to touring in the 1970's with a production of 'Cat on a Hot Tin Roof' and she delighted in appearing as a guest artist in college productions such as in El Centro College's 'The Madwoman of Chaillot' in the mid 1970's. She continued her stage career with national tours of 'Agnes of God' in 1983 and ''night, Mother' the following year. Her last stage appearance was in 1991 at the age of 76 when she played on Broadway and on tour with a starring role in Neil Simon's 'Lost in Yonkers', making in all, 560 performances of the play.

Mercedes had an eventful life which she described in two autobiographies, "The Two of Us" written in 1960 and "A Quality of Mercy" written in 1981.

She married twice, firstly in 1941 to William Fifield and divorcing in 1946. They had one child, John. Her second husband was radio producer, Fletcher Markle whom she married in 1950, divorcing 12 years later. Around this time Mercedes developed an alcohol problem which took her several years to conquer. She finally gave up drink in 1969 and thereafter became a lifelong campaigner against the evils of alcohol becoming a leading member of the US National Council on Alcoholism.

In 1987 her son, John Markle, murdered his wife and two daughters and committed suicide after having a a $5 million lawsuit for financial fraud filed against him. Mercedes was at first implicated in the fraud charges as her son had, unknown to her, opened an account in her name, but she was cleared of all charges.

Mercedes was a lifelong liberal and campaigned strongly for Adlai Stevenson's presidential election campaign in the 1950's.