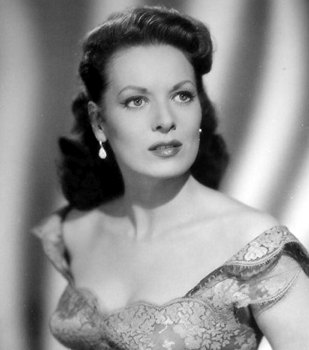 Maureen O'Hara Maureen O'Hara was an Irish-born film actress and singer who appeared in some of the most important movies of Hollywood's Golden Age. Tall, slender and athletic, she was famous for her mane of flaming red hair, deep green eyes and creamy complexion, and was dubbed the "Queen of Technicolor". She had a fiery screen presence and her versatility enabled her to work within various genres including social dramas such as 'How Green Was My Valley' as well as classics such as 'The Hunchback of Notre Dame' or swashbucklers like 'The Black Swan'. She was a favorite actress of director John Ford and was a great personal friend of John Wayne with whom she made five films. After retiring from movies in the early 1970's, she became a successful businesswoman.

She was born Maureen FitzSimons in Ranelagh, a suburb of Dublin, on 17 August 1920, the second of six children, in a comfortable middle class home. Her mother was a well known operatic singer, Marguerita Lilburn, and Maureen inherited her natural gift and enthusiasm for performing. Her father was a successful Dublin businessman who was part-owner of the famous Shamrock Rovers football team. He was insistent that Maureen should take secretarial and bookkeeping courses, learning skills which she used throughout her life, but all her childhood ambitions were for the stage.

After studying at the Ena Mary Burke School of Drama and Elocution in Dublin she attended the Abbey Theater School in the city - Ireland's national theater. This led to radio appearances and her stage debut with the Abbey Players when she was in her mid-teens. The beautiful and talented young redhead was noticed by influential movie makers in England.

Accompanied by her mother, Maureen went to London in 1938 for a screen test with the great actor/producer, Charles Laughton, who gave her a small, uncredited role in 'Kicking the Moon Around' in 1938. Laughton liked what he saw and, after another small practice role in the same year in 'My Irish My Molly' he cast her in her first important role as Mary Yellen in 1939 in 'Jamaica Inn', directed by Alfred Hitchcock.

Laughton signed Maureen up to a seven year contract with his film company, Mayflower Pictures, and later that year brought her to Hollywood to co-star with him as Esmerelda in the classic 1939 costume drama 'The Hunchback of Notre Dame'. He suggested she change her screen name from FitzSimons to O'Hara as it was an easier fit for the marquee lights. Within a year of her first professional movie performance, Maureen O'Hara was already becoming a well known Hollywood name.

In 1940 Laughton sold Maureen's contract to RKO as the Second World War had made filming in England impossible. After two uninspiring films in 1940, Maureen's career as a leading lady was given a boost when in 1941 John Ford cast her as the strong love interest in his social drama 'How Green Was My Valley'. The film was a massive hit, garnering ten Academy Award nominations and won the Best Picture award at the expense of 'Citizen Kane'. Maureen's status as a major Hollywood star was confirmed and assured and she quickly went on to become one of cinema's most popular actresses.

She was one of John Ford's favorite actresses and he loved to showcase her Irish beauty and fiery spirit. In 1950 Ford paired Maureen for the first time with John Wayne, as the southern vixen in 'Rio Grande'. She and Wayne became good friends and went on to make a further four more films together, including Ford's 'The Quiet Man' in 1952, 'The Wings of Eagles' in 1957 and the western comedy 'McClintock!' in 1963. Maureen became known as the beautiful actress who gave Wayne his sex appeal and helped make him an acceptable romantic lead.

Maureen was a natural athlete and was memorably Amazonian in a series of Technicolor swashbucklers of the 1940's, such as 'The Black Swan, with Tyrone Power in 1942, 'Sinbad the Sailor' with Douglas Fairbanks, Jr. in 1947, and 'Bagdad' with Vincent Price in 1949. She continued in the same vein in the 1950's with 'The Flame of Araby' in 1951, 'Against All Flags' with Errol Flynn in 1952, and 'The Redhead from Wyoming' the following year. She also had an important role in the evergreen holiday classic 'Miracle on 34th Street' in 1947, playing the mother of Natalie Wood.

Maureen's career took a short backward step during the late '50s when she sued the scandal magazine "Confidential" over a story in the March 1957 issue falsely accusing her of having been in an overly passionate embrace with an Hispanic man in the balcony of Hollywood's Grauman's Chinese Theatre. She won her case by proving from her passport that she was in Spain on the alleged date. She received a large settlement and the magazine went into terminal decline.

Maureen embraced the new medium of television from the early 1950's and showed she had inherited her mother's gift for singing. She appeared on many musical variety shows such as "Lux Video Theatre", "The Ed Sullivan Show", and "The Dinah Shore Show" and in 1960 she starred as Lady Christine FitzSimons in the musical 'Christine' which had a brief run on Broadway. She later recorded two musical albums, 'Love Letters from Maureen O'Hara' and 'Maureen O'Hara Sings Her Favorite Irish Songs'. In 1960 she had a big TV hit starring in the Greer Garson role in a remake of 'Mrs Miniver'.

In the 1960's Maureen's roles were more matriarchal, playing the mother of Hayley Mills in 'The Parent Trap' in 1961, then James Stewart's wife in the comedy 'Mr. Hobbs Takes a Vacation' in 1962 and a similar role with Henry Fonda in 'Spencer's Mountain' in 1963. She again played opposite James Stewart in 'The Rare Breed' in 1966 and her final movie appearance before retirement was, fittingly, with John Wayne, in the 1971 Western 'Big Jake'.

Maureen married three times. Her first husband was George H. Brown, a film producer and scriptwriter. The marriage was annulled in 1941, after two years, and in the same year she married film director William Houston Price. This marriage ended in 1953 reportedly as a result of his problem with alcohol. They had a daughter in 1944, named Bronwyn Brigid Price who became an actress under the family name of Bronwyn FitzSimons.

Maureen's third marriage was a truly happy one, to aviator and retired Air Force Brigadier General Charles Blair, in 1968. He had been a pilot for Pan American Airways and had, in 1951, flown the first solo flight over the North Pole. In 1971 Maureen retired from movies to become a full-time wife and mother. Tragically Blair was killed in a plane crash in 1978, but Maureen continued to manage his commuter airline business, Antilles Air Boats, in the Caribbean.

Maureen returned to acting after Charles's death, appearing in TV movies, and playing John Candy's smothering mother in 'Only the Lonely' in 1991. Between 1995 and 2000, she made a further three TV movies. She remained active, frequently travelling between her homes in Ireland, New York, California, and the Virgin Islands. Her autobiography, the bestseller "Tis Herself", was published in 2004.

Maureen O'Hara had a long and successful career. It comes as a surprise to realise that she received no competitive Oscar nominations from the Academy. However, in 2014 she received the Academy's honorary Oscar. She has a star on the Hollywood Walk of Fame and and was inducted into the Western Performers Hall of Fame in 1993. In 2004 she received the Lifetime Achievement Award from the Irish Film and Television Academy in her hometown of Dublin

Maureen O'Hara died from natural causes on October 24, 2015 at her home in Boise, Idaho. She was buried beside her late husband, Charles Blair, in Arlington National Cemetery.

No Nominations:
Honorary Lifetime Achievement Award (2014) "To Maureen O'Hara, one of Hollywood's brightest stars, whose inspiring performances glowed with passion, warmth and strength".

1941
They Met in Argentina
How Green Was My Valley

1943
Immortal Sergeant
This Land Is Mine
The Fallen Sparrow

1946
Sentimental Journey
Do You Love Me

1949
A Woman's Secret
Britannia Mews
Father Was a Fullback
Bagdad

1953
The Redhead from Wyoming
War Arrow

1956
Lisbon
Everything But the Truth

1961
The Deadly Companions
The Parent Trap

1965
The Battle of the Villa Fiorita