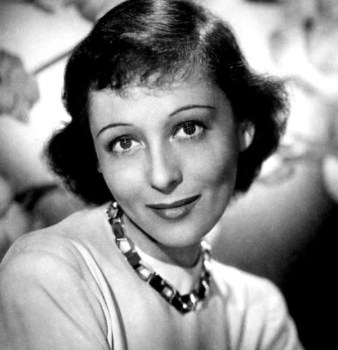 Luise Rainer was a German/American actress who had a brief but highly successful movie career during the 1930s. She was the first performer to win back-to-back Academy awards (in 1936 and 1937) - a feat achieved to this day by only five actors in the history of the Academy Awards. She was also one of the first artists to deliberately and consciously turn her back on the hypocrisy and falseness of Hollywood and the lack of artistic freedom allowed by the big Studios.

Luise Rayner was born on January 12, 1910 in Dusseldorf, Germany, into an upper-class, prosperous Jewish family. She had one older and one younger brother. Her father had been sent to Texas as an orphan at the age of six and he spent a large part of his early life there. As a young man he settled in Europe and married Emilie Königsberger, a classically trained pianist. Luise was raised in Hamburg and later in Vienna, Austria.

From an early age Luise was attracted to the arts and she began to paint and to dance, becoming a dance pupil of Mary Wigman, a well known German pioneer of expressionist dance and dance therapy.

She made the decision to become an actress, however, and she began, in secret, to study texts such as Wedekind’s Lulu.; Luise was inspired by the play, not by acting fame.

Her acting debut, aged 16, was when she took over from a sick actress to play the part of ‘Wendla’ in Wedekind’s 'Spring Awakening' at the School of Stage Art in Dusseldorf. Her acting talent was evident and many contemporaries expressed disbelief that she had received no training.

She was soon signed to a two year contract by actress and theater director, Louise Dumont. Dumont liked the talent which she saw in Rayner and took her under her wing.

She continued to act in a variety of plays including Ibsen’s 'Peer Gynt', Shakespeare’s 'Measure for Measure' and Pirandello’s 'Six Characters in Search of an Author'. During this time her family did not see her perform, disapproving of what they considered to be a vulgar profession.

Luise began studying acting with Max Reinhardt, joining his touring company performing in Berlin and Vienna and in other cities across Europe and by the time she was 18, there was already an "army of critics" who felt that she had unusual talent for a young actress. She fitted in well with Reinhardt's type of staging, and impressionistic acting style. By the early 1930s she had become a popular and well known stage actress in Berlin and Vienna. It was not long before Hollywood came calling.

Luise had a very short but highly successful Hollywood career.

She was discovered by Metro-Goldwyn-Mayer talent scouts, who signed her to a three-year contract. With Hitler's anti semitic shadow growing ever larger in Europe, she did not find it difficult to make the move to America. She arrived in the U.S. in January 1935 and was immediately enrolled in Louis B. Mayer’s famous finishing school for ingenues. Because of her poor command of English, Mayer assigned actress Constance Collier to train her in correct speech and dramatic modulation, and as a result Rainer's English improved rapidly

Her Hollywood movie career began in 1935 when she replaced Myrna Loy in 'Escapade', co-starring with the experienced William Powell, who gave her invaluable advice on performing in front of the camera.

. In 1936 she and Powell teamed up again in 'The Great Ziegfeld', for which she would win her first Oscar. Just before the picture was released, MGM signed Luise to a long-term contract. She did not have a big part in the film but her emotion-filled performance in a dramatic telephone scene caused her to be nicknamed the "Viennese teardrop" and all but guaranteed her the Best Actress award.

Rainer's next film was 'The Good Earth' in 1937, based on Pearl Buck's novel about hardship in China, in which she co-starred with another established actor, Paul Muni. She was required to portray a humble Chinese peasant subservient to her husband and speaking little during the entire film. Her comparative muteness, after her hysterically emotional telephone scene in 'The Great Ziegfeld", contributed to her winning her second Best Actress Oscar.

The award made her the first actress to win two consecutive Oscars, a feat not matched until Katharine Hepburn's two wins thirty years later, but it did not guarantee her a choice of ideal roles in the future.

She began to fight with Mayer for parts to which she aspired, including ‘Nora’ in Ibsen’s ' Doll’s House' and Marie Curie in a biopic of the Nobel Prizewinner, but, instead, she was cast in light comedies and melodramas such as 'The Emperor's Candlesticks' and 'Big City' in 1937', and The Toy Wife' ' and 'Dramatic School' the following year, which, although commercially successful, were not suited to her larger than life acting style.

After these less than inspiring roles, Luise became disenchanted with her Hollywood life, leading her to end her brief three-year film career, soon returning to Europe. Adding to her rapid decline, some feel, was the unexpected early death at age 37 of her producer, Irving Thalberg, whom she greatly admired.

During her time in Hollywood, Luise had been meeting the writers, artists and playwrights with whom she felt comfortable and alive. In 1936 she met the playwright Clifford Odets and on 8th January 1937 they were married. Their relationship was a tempestuous one and the marriage short-lived.

Their divorce was finalised in May 1940 by which time Odets’ extra-marital activity was well-known.

Her second marriage, in 1945, was to publisher Robert Knittel, a settled and happy marriage that could not have been more different from her first. The couple had one daughter, Francesca, born in 1946.

Luise had made her London stage debut as early as 1939 in Jacques Deval’s 'Behold the Bride', and debuted on Broadway in J.M. Barrie’s 'A Kiss for Cinderella' in 1942 and after turning her back on Hollywood, she continued to appear sporadically in theatrical productions.

During the 1950s, Luise moved to London and studied art at the Camden Institute. She specialised in collage work and in the 1970s exhibited her work at a number of galleries in London.

She spent her final years living in a flat formerly occupied by actress Vivien Leigh at Eaton Square, Belgravia, London.

[an error occurred while processing this directive]