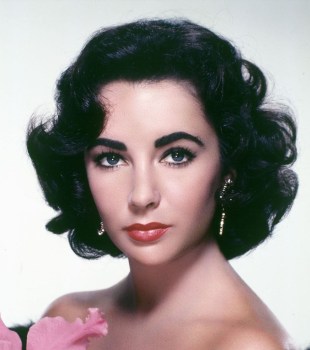 Elizabeth Taylor was one of the last of the great legends from Hollywood's Golden Age. She made her first movie when she was just nine years old in 1942, and she was basically raised in the original Hollywood studio system as a major child star at the age of 12 years. She was nominated for the Best Actress Academy Award on five occasions, winning twice, first in 1960 for 'Butterfield 8', and then in 1966 for 'Who's Afraid of Virginia Woolf?'.

She became as famous for her husbands, her serial illnesses and flamboyant lifestyle as for her considerable acting prowess. In 1963 she became the first actress to be paid one million dollars for her role as Cleopatra.

In 1999 the American Film Institute ranked her at number seven on its list of the "25 greatest women screen legends". She became one of the most famous women on earth, larger than life even by Hollywood standards. Not for nothing was she known as 'Hollywood Royalty'.

She was born Elizabeth Rosemond Taylor on February 27, 1932, in Hampstead, North-West London. Her parents were Americans from Arkansas and temporarily living in London, her father an art dealer and her mother a former actress. She had an older brother, Howard, born in 1929. The family lived in London until 1939, just before the outbreak of war, when they moved back to America and eventually settled in Los Angeles.

Elizabeth was a beautiful child with a natural poise and in 1941, her actress mother, recognising her potential, arranged for her to have a screen test at Universal Studios. As a result the nine year old made her movie debut in 1942 in 'There's One Born Every Minute', co-starring Carl "Alfalfa" Switzer from the "Our Gang" films. It was an inauspicious beginning for the future star as Universal cancelled her contract and she made no more films for Universal. Elizabeth's father knew MGM producer Sam Marx, and from him learned that the studio was searching for a young English actress for an upcoming 'Lassie' film. Elizabeth was offered the important role of Priscilla in 'Lassie Come Home' in 1943, appearing with established child star Roddy McDowall. The film was well received and both Elizabeth and McDowall were warmly praised. MGM signed Taylor to a seven-year contract and they nursed her into stardom.

After minor roles in two films, 'Jane Eyre' in 1943 and 'The White Cliffs of Dover' in 1944 Elizabeth was given the role that made her a star, Velvet Brown in 'National Velvet', playing a young English girl who trains a horse to win the Grand National Steeplechase. The film, which also starred Mickey Rooney, was a great success and more successful child and adolescent roles followed during the 1940's: 'Courage of Lassie' in 1946, ' Life With Father' in 1947, and 'A Date with Judy' and 'Julia Misbehaves' in 1948. In 1949, she played her last adolescent role, that of Amy in 'Little Women'. She was about to grow up quickly.

Her first two movies as an adult actress fared badly, 'Conspirator' in 1949 and 'The Big Hangover' in 1950 but Elizabeth hit the jackpot again with the romantic comedy which was to become a classic, 'Father of the Bride' in 1950, co-starring Spencer Tracy and Joan Bennett. Elizabeth married hotel heir Nicky Hilton in May 1950, the first of her eight marriages to seven husbands, and the marriage was over within nine months, ended by the abuse, both physical and mental, which she suffered from Hilton.

Her performance in her next movie, 'A Place In The Sun', in 1951, directed by George Stevens also attracted rave notices and made Elizabeth a major Hollywood star although MGM did not immediately give her parts on a par with her new status. For the next few years she was kept busy making movies which could be described as adequate but not startling, such as 'Callaway Went Thataway' in 1951, 'Ivanhoe' in 1952, 'The Girl Who Had Everything' in 1953 and 'Beau Brummel' in 1954. In 1952 she got married for the second time, to Michael Wilding an established British actor. They had two sons, Michael Jr. in 1953, and Christopher in 1955. The couple divorced in January 1957.

Elizabeth made her feelings known about the mediocre films she was being offered and in 1956 she was at last given a stronger role in the epic 'Giant' opposite Rock Hudson and James Dean, again directed by George Stevens. The film was a box-office hit and although Elizabeth's excellent performance did not receive a deserved Oscar nomination, it marked the start of a highly successful period in her Hollywood career. She was nominated for Best Actress Awards for four years in a row, firstly in 1957's 'Raintree County' then in 1958 she starred in 'Cat on a Hot Tin Roof' to rave reviews and was nominated again. In 1959 she was nominated for a third time for 'Suddenly, Last Summer', another big hit, and then finally in 1960 she was awarded the elusive Oscar for Best Actress for her wonderful performance in 'Butterfield 8' as a call girl who becomes involved with a married man.

Her personal life, too, seemed to have settled down when, 3 days after divorcing Michael Wilding in January, 1957, she married the movie producer, Mike Todd. It seemed that she had at last found the loving relationship she craved. They had a daughter, Elizabeth "Liza" Todd in August of that year. After 13 months of marriage, in March 1958 Mike Todd was killed in a plane crash. The following year she married Eddie Fisher, who had been Todd's best man at Liz and Mike's wedding. The marriage caused a sensation. Fisher was married at the time to "America's Sweetheart", Debbie Reynolds, and Elizabeth was portrayed in the popular press as a husband stealer. Although her career recovered from the bad publicity, her marriage to Fisher was the biggest Hollywood scandal of the late 1950's.

Liz left MGM at the end of her contract and for her first project away from the studio she chose the Tennessee Williams film 'Suddenly, Last Summer' and she insisted that her friend Montgomery Clift should co-star with her. Clift had become dependent on alcohol and drugs as a result of a car crash in 1956 near the home of Elizabeth and her then-husband Michael Wilding. Elizabeth's strong performance as a traumatized young woman, gained her a third Academy Award nomination and placed her among the top-ten most successful performers in Hollywood.

In 1960, after recovering from a near fatal bout of pneumonia, Elizabeth appeared in a film and a part which she disliked intensely - as a call girl in 'Butterfield 8'. She won her first Best Actress Academy Award, for the film and accepted that she had to thank the "sympathy vote" because of her near brush with death.

In 1963 she hit the headlines again when she starred in the title role of 'Cleopatra', one of the most expensive movies ever made up to that time, and for which her salary was $1,000,000. During the making of the movie she began an affair with her co-star, Richard Burton. Once more the gossip columnists had a field day as both Taylor and Burton were married to other people at the time.

After 'Cleopatra', Liz appeared in the disapointing 'The VIPs' in 1963 and then the following year she divorced Fisher and married Richard Burton. They appeared together in 1966 in the masterly film adaptation of Edward Albee's 'Who's Afraid of Virginia Woolf?' and Liz won her second Oscar for Best Actress. The movie received 13 nominations in all, including Best Picture, Best Director, and Best Actor for Burton, who lost to Paul Scofield for 'A Man for All Seasons'.

Elizabeth and Burton were now the most famous couple in the world and were feted wherever they went. Burton gave her expensive jewelry such as the "La Peregina Pearl", and the famous pear-shaped 69-carat "Burton-Cartier Diamond", and their flamboyant and extravagant lifestyle made he.adlines everywhere. They performed together in several more movies over the next few years including Franco Zeffirelli's production of 'The Taming of the Shrew' in 1967 and 'The Comedians' in the same year. Liz also appeared in John Huston's 'Reflections in a Golden Eye' co-starring Marlon Brando in 1967 but her box-office drawing power was fading, and she made fewer and fewer movies. In 1970 she made 'The Only Game in Town' with Warren Beatty, but this, too, failed at the box office. Her marriage to Burton did not last the glare of the media and they divorced in June 1974. They were reconciled and remarried a year and a half later but divorced again within 10 months.

Her career continued to falter thereafter. She continued to make TV appearances, notably in 1985 in the TV film 'Malice in Wonderland' when she played the gossip columnnist, Louella Parsons. She also appeared in television series, such as General Hospital, as well as the cartoon series 'The Simpsons', once as herself, and once as the voice of Marge Simpson. She also acted in theatrical productions and made her debut on both Broadway and the West End in 1982 in Lillian Hellman's 'The Little Foxes'. In 1983 she starred with Richard Burton again in Noel Coward's 'Private Lives' but it was poorly received. Burton died the following year.

Liz met Senator John Warner on a blind date and they married in December, 1976. Her career took a back seat as she tried to adapt to the life of a politician's wife, but the pressures were too great and they divorced in November, 1982.

Liz's eighth marriage, (to husband number 7) was to Larry Fortensky a construction worker 20 years her junior, whom she had met while in alcohol rehabilitation at the Betty Ford Centre. They had an opulent ceremony at Michael Jackson's Neverland Ranch and Jackson gave away the bride. This marriage also failed and they divorced in October, 1996 after 5 years.

In her later years, Elizabeth continued to hit the headlines but usually because of her health. She survived many serious health problems including skin cancer and an operation to remove a benign brain tumour. She devoted much of her time to her AIDS-related charity, the Elizabeth Taylor Aids Foundation (ETAF). By 1999, she had helped the charity to an estimated total of US$50 million to fight the disease. She also launched three perfumes and her 'White Diamonds' brand is still a consistent best-seller. In addition she designed jewellery of great elegance for 'The Elizabeth Collection'.

Elizabeth Taylor died from congestive heart failure in the Cedars-Sinai Medical Center in Los Angeles on 23 March, 2011 having suffered from the condition since November 2004.

She was a remarkable lady and she deserves the last word. She was asked what she would like to see written on her gravestone, and her answer was: "Here lies Elizabeth. She hated being called Liz. But she lived."

1942
There's One Born Every Minute

1948
A Date with Judy
Julia Misbehaves

1950
The Big Hangover
Father of the Bride

1953
The Girl Who Had Everything

1965
The Sandpiper
1966
Who's Afraid of Virginia Woolf?
1967
The Taming of the Shrew
Doctor Faustus
Reflections in a Golden Eye
The Comedians

1972
Zee and Co.
Under Milk Wood
Hammersmith Is Out