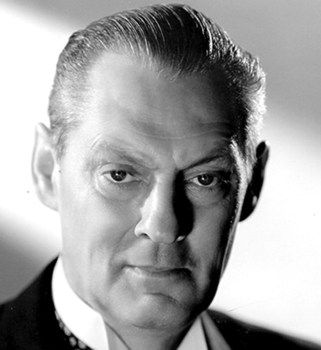 Lionel Barrymore was a towering figure in the history of American acting. As well as a magnificent movie actor he was a stage actor, director, composer and graphic artist. He was a member of the Barrymore acting dynasty and his younger siblings, John Barrymore and Ethel Barrymore were also both famous and successful actors. Whilst John Barrymore was renowned as a handsome man, christened ‘the profile’, Lionel had a more expressive 'everyman' face, which helped him to become one of Hollywood’s most popular and successful character actors.

Lionel won the Academy Award for Best Actor for his performance in 'A Free Soul' in 1931 and was also Oscar-nominated as a director for 'Madame X' in 1929. In addition to his acting talents he was a prolific song composer and an accomplished graphic artist. He remains best known to modern audiences for his portrayal of the evil Mr. Potter character in Frank Capra's 1946 classic 'It's a Wonderful Life' and as the patriarch of the screwball Sycamore family in 'You Can't Take It With You' in 1938. He was also well-known for playing Doctor Gillespie in the Doctor Kildare movies of the 1930s and 1940s and for his portrayal of Ebenezer Scrooge in the annual broadcasts of 'A Christmas Carol' during his last two decades.

Towards the end of his life he was incapacitated by a broken hip and arthritis and was confined to a wheelchair. It is an indication of the high esteem in which he was held by his peers and by the public that from 1938, many scripts were written or re-written for him to include a wheelchair-bound character.

He was born Lionel Herbert Blythe in Philadelphia on April 28, 1878, He had acting in his blood and was part of a famous American acting dynasty. He was the oldest child of stage actor Maurice Blythe who had become famous under the stage name of Maurice Barrymore and his wife Georgina Drew, who was the daughter of celebrated stage actor John Drew. Lionel, together with his sister, Ethel and younger brother, John, all sought careers away from the stage, but were all persuaded into the family vocation.ultimately becoming actors. All were brilliant.

As an acting family it was natural for the children to put on their own home made plays together. As the elder brother, Lionel would usually play the hero to Ethel's heroine, with the youngest sibling, John, forced to play the role of the villain.

Lionel was educated at the Art Students League of New York. and other private schools and went on to the Episcopal Academy in Philadelphia.

Barrymore always claimed that he did not want to be an actor, but rather an artist or musician. However it was expected of him that he would follow the family calling and as a young boy he appeared on stage with his maternal grandmother, actress and theater owner, Louisa Lane Drew. In 1900, aged 21, he made his Broadway debut with a walk-on role in the drama 'Sag Harbor' and then appeared alongside his uncle John Drew, Jr. in 'The Second in Command' in 1901 and 'The Mummy and the Hummingbird' in 1902. He continued in 1903 with 'The Other Girl' and in 1905, he appeared with John and Ethel in a pantomime, starring as the title character in 'Pantaloon' and playing another character in the other half of the bill, 'Alice Sit-by-the-Fire'.

In 1901 Lionel's father, Maurice had suffered a complete breakdown during a stage performance, witnessed by Lionel's brother, John. He was committed to an asylum, suffering from the effects of syphilis. He died in 1905, still institutionalised.

In 1906 Lionel temporarily retired from acting when he travelled with his new wife, Doris, to Paris in order to train as an artist. After an unfulfilling three years he returned in 1909 to appear in Chicago in 'The Fires of Fate' and performed several plays with the ambitious Nance O'Neill company. The following year he rejoined his family, playing in their vaudeville act but he was beginning to develop an interest in an experimental and exciting new medium - moving pictures.

He started his film career with the Biograph company and appeared many times in short, two-reeler silent movies directed by D. W. Griffith, including 'The Battle' in 1911 and 'The New York Hat' the following year, co-starring Mary Pickford, and 'The Bartered Crown' in 1914. During this time he appeared with many future silent movie stars such as Mack Sennett, Mabel Normand and the Gish sisters. Lionel also wrote numerous scripts for Biograph and made his directorial debut for them with the silent short film 'His Secret' in 1913.

For the next decade he interspersed stage work with making movies such as 'A Modern Magdalen' in 1915, and 'His Father's Son' and 'The Millionaire's Double' in 1917. One of his most successful stage roles was as Colonel Ibbetson in 'Peter Ibbetson' in 1917. He followed this in 1918 with another theatrical success, as Milt Shanks in 'The Copperhead', a play by Augustus Thomas and in 1920 he recreated his role in the movie of the same name. He played more roles on Broadway including a poorly received 'Macbeth' in 1921 and a well received Tito Beppi in 'Laugh, Clown, Laugh!' in 1923 with his second wife, Irene Fenwick.

In 1925 he played three productions which received extremely poor reviews and Lionel made an important career choice. In future, he determined, he would be a movie actor. In 1925 he moved to Los Angeles and the following year he signed a contract with MGM. He would stay with the studio for almost the whole of his future career and he never appeared on stage again.

When Barrymore joined MGM in 1926, the studio was only two years old and Barrymore already had a good working relationship with the owner, Louis B. Mayer from making movies in the preceding years for Metro Pictures.

After some average feature length silents for MGM, Barrymore gained critical acclaim when he co-starred with Gloria Swanson in 'Sadie Thompson' in 1928. In the same year he appeared in his first sound movie, 'The Lion and the Mouse' and his stage-trained voice enabled him to make the transition with ease. He was still anxious to prove himself as a director and after directing John Gilbert in 'His Glorious Night' in 1929 he received a Best Director Oscar nomination the following year for his direction of 'Madame X'.

In 1931 he returned to full-time acting, appearing in several movies including co-starring with Norma Shearer and Clark Gable in 'A Free Soul' in 1931, playing an alcoholic defence attorney, for which he won an Academy Award for Best Actor. He continued for many years playing a series of prestigious character parts in high quality movies.

In 1932 he co-starred for the only time with both his siblings, John and Ethel in 'Rasputin and the Empress' and in the same year he appeared with John in the classic, 'Grand Hotel' followed the next year by 'Dinner at Eight', again with John. He appeared in the classic adaptations 'Treasure Island' in 1934 and 'David Copperfield' the following year before again appearing in an unforgettable movie classic with Greta Garbo and Robert Taylor, 'Camille' in 1936.

Barrymore suffered badly from arthritis of the hip, twice exacerbated by breaking his hip after falls. After 1937 he spent most of his time in a wheelchair. His performance in 'Captains Courageous' in 1937 was the last time he was seen on screen standing and walking unaided.

In 1938 the first of a series of 'Dr Kildare' movies was released, 'Young Dr. Kildare' with Barrymore playing the venerable Dr Gillespie. He continued playing the role in eleven further movies over the next six years and gained a large popular following.

During the 1940's Barrymore reduced the number of films he made but continued to appear in top class movies with well known co-actors. In particular in 1946 he portrayed the darker side of humanity with his Mr Potter, a character with no redeeming features whatsoever, in 'It's a Wonderful Life' with James Stewart. In the same year he appeared as Senator Jackson McCanles in 'Duel in the Sun' with an all star cast including Jennifer Jones, Gregory Peck and Joseph Cotten and in 1948 he co-starred with Humphrey Bogart and Lauren Bacall as the hotel proprietor in 'Key Largo'. He finished off the decade in style in 1949 with a wonderful acting display as the old captain in ' Down to the Sea in Ships'. After several more screen appearances. Barrymore's last movie role was a cameo in the musical, 'Main Street to Broadway', in which his sister, Ethel also appeared.

Radio and the Arts

Barrymore's contract with MGM did not allow him to perform on television but he was active on radio and starred in the series 'Mayor of the Town' for seven years from 1942. He also composed the theme music for the programme.

He became well known for playing for many years between 1934 and 1953, the role of Ebeneezer Scrooge in an annual Christmas radio broadcast.

During World War II he acted as narrator for an album of records entitled "Great Music" and made by the Armed Forces Radio service.

Barrymore was a talented composer and in 1942, after the death of his brother, John, he composed a memoriam which was later performed by the Philadelphia Orchestra. He also wrote a symphony, 'Partita' in 1944 which was played by Fabien Sevitzky with the Indianapolis Symphony Orchestra.

In 1952 he composed a musical background to a recording of 'Ali Baba and the Forty Thieves' and also acted as narrator.

Barrymore was married twice, firstly in 1905 to actress, Doris Rankin. Their two daughters both died in infancy, the first in 1908 and the second in 1916. Their deaths hit Barrymore hard. He and Doris divorced in 1923 and he married his second wife, Irene Fenwick, also an actress, in the same year. Irene was an ex- girlfriend of John Barrymore and the marriage caused a three year rift between the brothers. The marriage ended in 1936 with Irene's death.

During the last years of his life Barrymore had serious financial problems and owed large sums to the Internal Revenue Service. From 1939 he had to pay most of his earnings in back taxes. After his death the Revenue Service also took the proceeds of the sale of his artwork.

Lionel Barrymore died from a heart attack on November 15, 1954 in Van Nuys, California. He was buried next to his second wife and his brother, John, in Calvary Cemetery, Hollywood.

1920
The Copperhead
The Master Mind
The Devil's Garden

1921
The Great Adventure
Jim the Penman

1922
Boomerang Bill
The Face in the Fog

1925
A Man of Iron
The Girl Who Wouldn't Work
Children of the Whirlwind
The Wrongdoers
Fifty-Fifty
The Splendid Road
The Woman Who Did
Ben-Hur: A Tale of the Christ(uncredited)

1938
A Yank at Oxford
Test Pilot
Screen Snapshots Series 17, No. 12 (Documentary short)
You Can't Take It with You
Young Dr. Kildare

1944
3 Men in White
Since You Went Away
Dragon Seed voice, uncredited)

1945
Between Two Women
The Valley of Decision