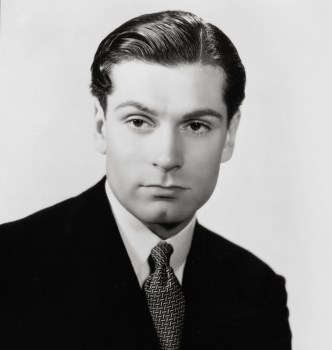 Laurence Olivier was an English actor, director, and producer, who achieved the mantle of greatness in a long and distinguished career on both stage and screen, and who is regarded by many as the greatest English-speaking actor of the twentieth century.

During his career he played over 120 stage roles and appeared in nearly sixty films in a great variety of styles ranging from Greek tragedy, Shakespeare and Restoration comedy to modern drama. In the latter part of his career he continued his successes on television, appearing in numerous successful TV movies and series.

He made many trips from England to work in Hollywood movies and he was nominated for Academy Awards in the capacity of actor, producer or director, eleven times, winning two Oscars, for Hamlet in 1948, when he also became the first person to direct himself to a Best Actor Award. The Academy also honored him with two special Oscars.

In 1999, the American Film Institute ranked him at number fourteen in their list of the Greatest Male Stars of All Time. He was also nominated nine times for Emmy awards, winning five, and he was a three-times Golden Globe and BAFTA winner.

He was made a knight by the British Crown in 1947 and then Baron Olivier in 1970, allowing him to sit in the House of the Lords. In 2007 a statue of him as Hamlet was unveiled outside the National Theatre on London's South Bank.

He was born Laurence Kerr Olivier in Dorking, Surrey, in southern England, on 22 May 1907. He was known within the family as "Kim". His mother died when he was 12 and he and his elder brother and sister were raised in a strictly religious atmosphere, presided over by his father, Henry, an Anglican cleric, who was also an enthusiastic theater-goer.

His initial contact with the stage came at his first school, the choir school of All Saints in London's West End, where at the age of 9, he played Brutus in the school production of 'Julius Caesar'. Going on to St Edward's School, Oxford he again played Shakespearean roles in school productions such as 'The Taming of the Shrew', 'Twelfth Night' and 'A Midsummer's Night Dream'. His talent was obvious and on his father's advice he enrolled, aged 17, at the Central School of Speech Training and Dramatic Arts in London.

Now a full time drama student, Olivier lost no time in turning professional and he made his London debut in 1924 in 'The Suliot Officer', and after graduation in 1926, he joined the Birmingham Repertory. His rise was rapid and within a year he was one of the company's established leading men, playing Hamlet and Macbeth.

He quickly moved to London's West End, transferring his talents to the London stage as a handsome leading man. He appeared in a string of successes, such as 'Journey's End', 'The Last Enemy' and Noel Coward's 'Private Lives'.

After marrying actress Jill Esmond in 1930 he moved with her to America and they appeared together in the first Broadway showing of 'Private Lives' early in 1931. In the same year he signed his first Hollywood contract, with RKO, at the same time rejecting changing his name to "Larry Oliver". His early films reveal his uneasy relationship with movies. He appeared in 'Potiphar's Wife' in 1931 and 'Perfect Understanding' in 1933 but after being rejected by Greta Garbo in favour of John Gilbert for a role in 'Queen Christina' he became even more disenchanted with the movie business, preferring to work in theater.

Moving back to London his career was given a major boost when he was chosen by John Gielgud for his 1935 stage production of 'Romeo and Juliet'. Olivier and Gielgud alternated the roles of Romeo and Mercutio and the production was an outstanding success, resulting in an invitation for Olivier to be the leading man at the Old Vic Theater in 1937/38.

At the Old Vic Olivier was in his natural element and he gave memorable performances in many of Shakespeare's plays including 'Hamlet', 'Othello', 'Henry V', 'Coriolanus', and 'Twelfth Night'. By the end of 1938 he had come to be regarded as one of the foremost Shakespearean actors in England. His first big screen Shakespeare was in 1936, playing Orlando in 'As You Like It', with Paul Czinner.

In the late 1930's Olivier also made a number of successful movies for British producer and director, Alexander Korda, such as 'Fire Over England' in 1937, '21 Days'and 'The Divorce of Lady X' in 1938, and 'Q Planes' in 1939. It was whilst making 'Fire Over England' that he met the young actress, Vivien Leigh, who was to have a profound effect on his life.

Olivier was still married, unhappily, to Jill Esmond and Leigh was also married but their mutual attraction was strong and they began an affair. When Olivier returned to Hollywood in 1939 to play Heathcliffe in William Wyler's 'Wuthering Heights, Vivien followed shortly after, partly to be with him and partly to fulfil her ambition to play Scarlet O'Hara in 'Gone With The Wind'.

Their trip proved worthwhile. Olivier received an Academy Award nomination for Best Actor for his portrayal of the volatile and unpredictable Heathcliffe and Leigh won the Academy Award for Best Actress for 'Gone with the Wind'. They were suddenly the toast of Hollywood, a golden couple, international celebrities feted throughout the world. After each obtained a divorce, they were finally able to get married in August, 1940.

Olivier was now established as a Hollywood leading man and his movie career continued in an upwards direction as he became more accepting of the medium of film and of the necessity to moderate his theatrical style to fit in with more intimate medium. In 1940 he appeared in 'Rebecca' and 'Pride and Prejudice' to extremely favorable reviews.

Before returning to England in 1942 the couple starred together first in a commercially unsuccessful stage production of 'Romeo and Juliet' in New York, and then in a much more successful venture, 'That Hamilton Woman' in 1941 with Olivier as Horatio Nelson and Leigh as Emma Hamilton.

Back in wartime England Olivier joined the Royal Navy, took flying lessons and became a pilot in the Fleet Air Arm, rising to the rank of Lieutenant. At the same time he was able to serve as co-director of the Old Vic Theater (with Ralph Richardson) and he began, on both stage and screen, both as director and actor, to fulfill the rich promise he had shown from the outset of his career.

In 1944, Olivier starred in a marvellously patriotic 'Henry V', as well as producing and directing it. It was a great success both critically and financially and he followed it in 1948 with one of his greatest accomplishments, 'Hamlet' which he starred in, adapted, and directed himself to win two Academy Awards for Best actor and Best Picture, and an Oscar nomination for Best Director.

After 1950 Olivier's movie output slowed and he concentrated on the stage. When he made a movie he tended to choose challenging roles such as Captain MacHeath, in 'The Beggar's Opera' in 1953, which was his first movie singing role, and, Prince Regent of Carpathia in 'The Prince and the Showgirl' with Marilyn Monroe in 1957.

He took on his third major Shakespeare project as both director and star (after 'Henry V' and 'Hamlet') when he made and starred in 'Richard III' in 1955, thought by many critics to be his greatest screen performance and for which he was nominated for a Best Actor Academy Award for a fifth time.

Olivier's marriage to Vivien Leigh was a difficult time for him. Leigh suffered from manic-depression, or bipolar mood disorder which caused her to have regular and dramatic mood swings. Their relationship disintegrated during the 1950's and Olivier had affairs with actresses Dorothy Tutin and Claire Bloom during this time. In 1958, Leigh began an affair with the actor Jack Merivale, who was aware of her medical condition and cared for her until her death in 1967.

Olivier and Leigh divorced in December 1960 and Olivier married the actress Joan Plowright who was to give his life emotional stability and with whom he had a son and two daughters.

He had met Joan when they both appeared in the film version of John Osborne's 'The Entertainer' in 1960. Olivier had previously taken on the challenging role of the seedy vaudevillian, Archie Rice on stage in 1956 in the original stage production and it proved a resounding success both on stage and on screen.

Olivier continued to work regularly in the theater, which was always his first love. He was one of the founders, in 1962, and the first director, of the National Theatre of Great Britain, inaugurating it in 1963 with his production of Hamlet. He was the director for ten years durng which he appeared in twelve plays and directed a further nine, with particular success with his starring roles in 'Othello' in 1964, 'The Dance of Death' in 1967 and O'Neill's 'Long Day's Journey into Night' in 1971.

In the latter part of his career, Olivier gradually transferred to supporting actor rather than leading man, often in character roles in which he was hardly recognisable. His performances in 'Spartacus', in 1960, 'Uncle Vanya' in 1963, 'Othello' in 1965 and 'Battle of Britain' in 1969 were particularly well received by the critics.

Olivier's movie work later in his career, after losing his directorship of the National Theater to Peter Hall, was often money motivated, although he still gave mesmerising performances in memorable movies such as 'Sleuth' in 1972, 'Marathon Man' in 1976, and 'The Boys from Brazil' in 1978, each of which brought him Academy Award nominations.

Olivier's health had been in decline since the mid 1960's when he had undergone treatment for prostrate cancer and he suffered a number of different ailments during the rest of his life, including bronchitis, pleurisy, dermatomyositis (a degenerative muscle disorder), and pneumonia.

He continued to work extremely hard, making more appearances on television including some brilliant performances such as with Katharine Hepburn in 'Love Among the Ruins' in 1975, 'Brideshead Revisited' in 1981, and John Mortimer's 'A Voyage Round My Father' the following year. In 1984, although in declining health, he gave his last great Shakespearean performance on television as 'King Lear'.

In 1988, aged 81, he gave his last performance, as a wheelchair-bound old soldier, in Derek Jarman's film 'War Requiem'.

Laurence Olivier died at his home in Steyning, West Sussex, England, on 11 July 1989, aged 82, from renal failure. He was cremated and his ashes interred in Poets' Corner in Westminster Abbey, London.

Olivier remained throughout his career, and always considered himself, a theatrical rather than a cinematic actor. Nevertheless he gave some unforgettable, towering performances on screen as well as on stage and the body of his screen work remains as a reminder that Laurence Olivier was one of the greatest creative actors the world has ever seen.

1930
Too Many Crooks
The Temporary Widow

1943
The Volunteer
The Demi-Paradise

1953
A Queen Is Crowned
The Beggar's Opera

1957
The Prince and the Showgirl

1968
The Shoes of the Fisherman
Romeo and Juliet

1969
Oh! What a Lovely War
The Dance of Death
Battle of Britain

1973
The Merchant of Venice

1976
The Magic of Hollywood... Is the Magic of People
Marathon Man
The Seven-Per-Cent Solution

1981
Inchon
Clash of the Titans