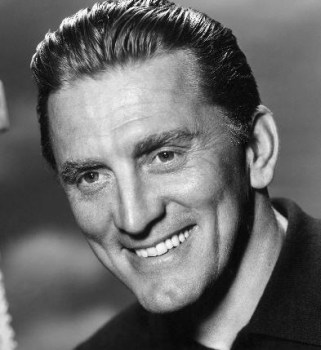 Kirk Douglas was an iconic American actor, author and film producer whose movie career started in 1946 and who became well known for his tough guy roles as soldiers, cowboys and gangsters in over 80 films. He was the father of Hollywood actor Michael Douglas.

He received three Best Actor Oscar nominations for his performances in 'Champion' in 1949', The Bad and the Beautiful' in 1952, and 'Lust for Life' in 1956. He also was awarded a special Oscar in 1996 for "50 years as a moral and creative force in the motion picture community". On the American Film Institute's list of the greatest male American screen legends of all time he is ranked at number 17.

Douglas also made a major contribution to the ending of the infamous Hollywood blacklist which had destroyed many talented careers during the previous ten years, when in 1960, he insisted on crediting blacklisted screenwriter Dalton Trumbo for his script adaptation of 'Spartacus'.

He was born Issur Danielovitch Demsky on December 9, 1916 in Amsterdam, New York. He was the only boy out of seven children. His parents, Russian Jewish immigrants from Gomel, now in Belarus, who came to America in 1912, were dealers in secondhand goods. Douglas had a tough childhood. Money was tight and he had to endure anti-semitic taunts from other kids. He learned to look after himself.

The young man was a natural athlete and became an accomplished wrestler. He went to St. Lawrence University on a wrestling scholarship working part-time as a janitor and gardener to help pay his way.

The young Issur began to dabble in the University theater and found that he enjoyed it and that he had a talent for acting, and a natural stage presence. He decided on making acting his career and his obvious talent was such that he obtained a scholarship to the American Academy of Dramatic Arts in New York City. Again he worked hard at various jobs to pay his way, including bellhop and professional wrestler.

Towards the end of his drama course Issur changed his name to Isadore Demsky and in 1941 he appeared for the first time on Broadway as a telegraph boy in 'Spring Again'. Changing his name again, this time to Kirk Douglas, he enlisted, when America entered WWII, in the US navy, serving as a communications officer.

After discharge from the navy in 1944 Kirk returned to New York to resume his fledgling career. He did some radio work and performed on Broadway again in 'Kiss and Tell', and 'Alice in Arms' in 1945.

His career was given a big boost by another ex-classmate from the Academy of Dramatic Arts, Lauren Bacall, who arranged a movie screen test for him with producer Hal B. Wallis. As a result, in 1946 he was given the lead role opposite Barbara Stanwyck in his first movie, 'The Strange Love of Martha Ivers'. He grabbed the opportunity with both hands and the reviews of his performance were excellent. He was on his way and more well received movie work followed in 1947 with 'Mourning Becomes Electra' and 'Out of the Past'. After his first of seven appearances with Burt Lancaster in 'I Walk Alone' in 1948 he received his first Academy Award nomination in the role of a driven boxer in 'Champion' in 1949.

His confident and forceful screen persona was thus established early and his growing stature in the industry was reflected in the roles he was offered with some of Hollywood's top directors. In 1951 Billy Wilder's 'Ace in the Hole', William Wyler's 'Detective Story' in 1951 and Howard Hawks's 'Big Sky' the following year all helped to demonstrate Douglas's powerful acting and screen presence.

Kirk was recognised again by the Academy when he received nominations for Best Actor for his performances in 'The Bad and the Beautiful' in 1952 and as Vincent van Gogh in 'Lust for Life' in 1956. He won a Golden Globe award for his role as Van Gogh.

Off screen also, he was a force to be reckoned with, and in 1955 he formed his own production company, 'Bryna Productions', which gave him total control over his movies. Through Bryna he made, with director Stanley Kubrick, the brilliant anti-war movie 'Paths of Glory' in 1957 in which he played the French army officer Col. Dax who defends three soldiers in WWI, unjustly accused of cowardice.

Douglas started the 1960's as both the producer and eponymous star of the classic movie 'Spartacus' the epic story of a gladiatorial revolt during the Roman Empire. The movie was a smash hit with the public and behind the scenes Douglas made a successful stand for principle by insisting that the screenwriter, Dalton Trumbo, who had been blacklisted during the McCarthy 'Reds under the Beds' hysteria of the previous decade, should be fully credited for his work. It was a courageous stand for him to take and he was one of the main instruments of the final ending of the infamous and wasteful Hollywood blacklisting policy.

The 1960's was a decade of constant work for Douglas. He starred in many notable films including 'Town Without Pity' and 'The Last Sunset' in 1961, 'Lonely Are the Brave' and 'Two Weeks in Another Town' in the following year. He appeared with John Wayne in several movies during this time such as the World War II story 'In Harm's Way' in 1965 and the Middle East drama 'Cast a Giant Shadow' in 1966. He returned to the theater in 1963 to appear in 'One Flew Over The Cuckoo's Nest' and cannily retained the film rights which enabled his son, Michael, to bring the story to the screen in 1975.

Towards the end of the 1960's there was a definite shift of emphasis in movies away from the traditional 'heavy' leading man and Douglas was forced to look elsewhere for his roles. As always he continued to bring great intensity and intelligence to his performances. In 1971 he played a gunslinger staking his skill and his life against Johnny Cash in 'A Gunfight'. In 1973 he tried his hand at directing for the first time with 'Scalawag', playing a one-legged man, but to indifferent reviews. Later in that year, he appeared in a musical version of Dr. Jekyll and Mr. Hyde. In 1975 the Western movie 'Posse', his second effort at both starring and directing, fared better with the critics and the following year he joined Burt Lancaster again in the made-for-TV movie 'Victory at Entebbe'.

Douglas married twice. During one leave in May 1943 he married an ex-classmate of his at the Academy, rising young actress Diana Dill, with whom he had two sons, actor Michael Douglas and producer Joel Douglas.

The marriage ended in 1951 and the actress moved back to New York with the couple's two young sons. In 1954 he married his French publicity agent, Anne Buydens with whom he had two sons, producer Peter Vincent Douglas and actor Eric Douglas, who died in 2004 of an accidental drug overdose.

Burt Lancaster
During his career Douglas made a total of seven films with Burt Lancaster, the two almost becoming a double act, although they never had a completely cordial relationship. Their movies included 'Gunfight at the OK Corral' in 1957 which became very popular and in 1959 they both gave outstanding performances in 'The Devil's Disciple'. Again they each had leading roles in the political thriller, 'Seven Days in May' in 1964.

Douglas did not let his advancing years slow him down and he returned to the stage very successfully in 1981 in 'The Boys in Autumn' about an adult Huckleberry Finn and Tom Sawyer. Two years later he made another movie which has proved a lasting favorite, 'The Man from Snowy River' and in 1985 he received an Emmy nomination for his role in the TV movie 'Amos'. The following year he and Burt Lancaster performed their last film together an affectionate parody movie called 'Tough Guys'.

As the movie roles dried up Douglas took on another career challenge - that of author - and in 1988 his autobiography 'The Ragman's Son' was published and became an immediate bestseller. He has continued to write ever since, many of his books continuing his life story, such as 'Climbing the Mountain: My Search for Meaning' in 1997 and 'My Stroke of Luck" in 2002. He has also written some novels such as 'Dance with the Devil', 'The Gift', and 'Last Tango in Brooklyn' which have been critically well received.

Douglas had a stroke in 1996 which impaired his ability to speak but this did not stop him taking on new challenges and new acting roles. In 1999 he performed in 'Diamonds' with Dan Ackroyd, and in 2006 he co-starred with Michael A. Goorjian in 'The Illusion'.

Kirk Douglas is still in the public eye, an indomitable figure. In 2009 he performed a one-man show called 'Before I Forget' which formed the basis for a 2010 documentary. Although he never won an Academy Award he has received many honors. In 1981 he received the Presidential Medal of Freedom for his work as Goodwill Ambassador for the US State Department and two years later he received the Jefferson Award for the "Greatest Public Service by a Private Citizen". He has received the French 'Chevalier of the Legion of Honor', the German 'Golden Kamera' Award and as well as his honorary Academy Award in 1995 he received the American Film Institute's Lifetime Achievement Award in 1999 and the UCLA Medal of Honor in 2002.

Very few stars from Hollywood's Golden Age few shone more intensely or longer than Kirk Douglas. He was a formidable presence in the movie world, a strong, forthright example to us all.

1946
The Strange Love of Martha Ivers

1948
I Walk Alone
The Walls of Jericho

1951
Along the Great Divide
The Big Carnival
Detective Story

1960
Strangers When We Meet
Spartacus

1961
Town Without Pity
The Last Sunset

1962
Lonely Are the Brave
Two Weeks in Another Town

1970
There Was a Crooked Man...
1971
The Light at the Edge of the World
A Gunfight
Keep Your Fingers Crossed