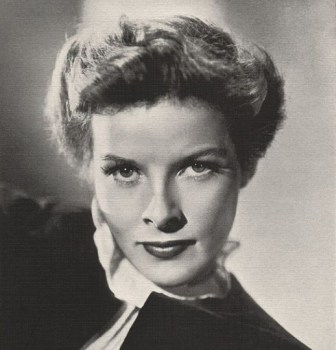 Katharine Hepburn was one of the brightest Hollywood stars of all. She had a career of unparalleled success, spanning seven decades, in which she appeared in over fifty movies, and won four Best Actress Oscars, three of them after passing the age of sixty. She formed several unforgettable screen partnerships with acting giants such as Cary Grant, Spencer Tracy and Humphrey Bogart, and her work spanned a variety of genres from screwball comedy to powerful drama.

In 1999, she was ranked by the American Film Institute as the number one female star in the history of American cinema. She was a formidable, original and unforgettable talent.

She was born Katharine Houghton Hepburn on May 12, 1907, in Hartford, CT. Her father was a well known urologist and her mother a feminist suffragette and an early advocate of birth control. Katharine had a comforable upbringing with her three brothers and two sisters and was encouraged by her parents to be independent minded and self disciplined.

In 1921,at age 13, Katharine found the body of her much loved older brother, Tom, hanging by the neck from a rafter. The death was described as accidental by the family although it seems quite possible that it was suicide, but it naturally had a profound effect on the young Katharine and it took her many years to recover from the trauma.

Hepburn received her primary education at the Kingswood-Oxford School in West Hartford, Connecticut, before going on to Bryn Mawr College where she graduated in history and philosophy in 1928. Whilst there she met and married Ludlow Ogden Smith, a New York businessman. Smith was to become a lifelong friend and financial support but the marriage was a stormy one and did not survive Katharine's driven theatrical ambition. They spent less and less time together and finally divorced in 1934.

Katharine's first acting experience had been in school productions but then whilst at Bryn Mawr she met a producer called Eddie Knopf who cast her in several local stock company productions. It was her introduction to professional acting and by late 1928 she was already making a name for herself on Broadway in 'These Days'. for the next few years she learned her new trade and developed a reputation for forcefully arguing with directors which caused her to be dismissed from some productions. But she always bounced back.

In 1932 her success as Antiope the Amazon princess in 'The Warrior's Husband' on Broadway led to a contract with RKO and her first film with a director with whom she would form a fruitful partnership, George Cukor. He cast her in 'A Bill of Divorcement' in 1932, the first of eight magnificent movies they would make together and her performance gave her an immediate star status and a new and improved contract with RKO.

The following year (1933), Hepburn won her first Oscar in 'Morning Glory', for her compelling portrayal of the ingenue Eve Lovelace who focuses on career instead of romance. In the same year, she played Jo in the record-breaking screen adaptation of 'Little Women' and she earned her second Oscar nomination in 1935 in the title role of 'Alice Adams'. In a few years she had become a major Hollywood star but she then had a series of box-office failures. 'Spitfire' in 1934, 'Break of Hearts' and 'Sylvia Scarlett' the following year, 'Mary of Scotland' in 1936, and 'Quality Street' in 1937 were all unpopular. Even the wonderful screwball comedy 'Bringing Up Baby' in 1938, with Hepburn and Cary Grant at their comedic best was not well received by the public although it is now revered as a comedy classic.

She was voted 'Box Office Poison' in 1938 but she was in good company - Fred Astaire, Joan Crawford, Dolores del Río and Marlene Dietrich were also similarly voted. Part of Hepburn's problem in the early years of her career was her disregard for the normal conventions of acceptable film star behaviour. She rarely wore makeup, she wore trousers most of the time, before it was fashionable to do so, she often refused to give autographs or pose for photographs, and she gave sharp answers to reporters' questions, ("Two white and three colored," was her answer when asked if she had any children).

Hepburn recognised that her fledgling movie career was sliding and she fought back strongly. She first acquired the film rights to Philip Barry's play 'Holiday' and then, in 1938, with Cukor directing, appeared in it, co-starring at her dazzling best with Cary Grant. She built on that success by commissioning a new play from Barry and after playing it successfully on Broadway, she sold it, with herself and Cukor to MGM. The resulting movie, 'The Philadelphia Story', came out in 1940 and was a critical and box-office triumph, showing Hepburn at her majestic best as the spoilt heiress Tracy Lord, along with the considerable talents of Cary Grant and James Stewart. She received another Best Actress Nomination and the revival of her career was triumphantly accomplished.

Her next movie 'Woman of the Year' in 1942, directed by George Stevens, gave her her fourth Best Actress Oscar nomination and saw her paired for the first time with Spencer Tracy. It was the start of a partnership and a romance which would last 25 years through eight more films and end only with Tracy's death in 1967.

After her stormy marriage to Ludlow Smith in the early 1930's, Hepburn was romantically linked to several men including Hollywood agent Leland Hayward and multimillionaire Howard Hughes, but the love of her life was undoubtedly Spencer Tracy. After falling in love on the set of 'Woman of the Year' theirs became one of Hollywood's most famous, and most secret, romances. They never married, as Tracy, a strict Catholic would not divorce his estranged wife and although they were undeniably a loving couple they maintained separate homes to give the impression of living apart.

By her own high standards, Hepburn's next few films during the mid to late 1940's were very average but then she hit top form again with the wonderfully witty 'Adam's Rib' in 1949, her third movie with Tracy. Then in 1951 she co-starred with Humphrey Bogart in 'The African Queen' playing a prim and proper spinster missionary in Africa during World War I, who convinces a hard-drinking riverboat captain (Bogart), to use his boat to attack a German ship. She received her fifth Best Actress nomination, losing out to Vivien Leigh in 'A Streetcar Named Desire'.

Hepburn never forgot her theatrical side and in 1952 appeared in London in an adaptation of George Bernard Shaw's 'The Millionairess'. During the decade she appeared in a number of well-received Shakespeare productions including 'The Merchant of Venice', 'Much Ado About Nothing', 'Twelfth Night' and 'Anthony and Cleopatra'.

In movies, Hepburn continued to play roles similar to Rose Sawyer in 'The African Queen' - independent spinsters who, underneath an aloof exterior, needed a man - and she received more Academy Award nominations for such roles in 'Summertime' in 1955, 'The Rainmaker' in 1956 and 'Suddenly, Last Summer' in 1959.

After a three year break from moviemaking, Katharine gave another spellbinding performance as Mary Tyrone in O'Neill's 'Long Day's Journey Into Night' for which she received another Best Actress Academy Award nomination (her ninth). She devoted the next five years to caring for Spencer Tracy in his final long illness. They were able to make one last film together, the moving 'Guess Who's Coming to Dinner' in 1967. Katharine won her second Best Actress Award for the film but always believed that it was meant to honor Tracy, who had died shortly after completion of filming.

1968 was a record-breaking year for Katharine as she became the most nominated actress and first to win three Best Actress Oscars; she won for her role as Eleanor of Aquataine in 'The Lion in Winter'; her tie with Barbra Streisand for her performance in 'Funny Girl' was the first and (to date) the only instance of a tie in that category in the Academy's history.

In 1969 Katharine returned to Broadway after many years to star in 'Coco', a musical about designer Coco Chanel, and she received a Tony nomination for Best Actress in a Musical.

Katharine reserved some of her best performances for her later years on television, particularly in the TV films she made with George Cukor, the director who brought out the best in her. For instance, she gave an Emmy-winning performance opposite Laurence Olivier, in 'Love Among the Ruins' in 1975. She continued working through the next two decades in various TV-movies, including 'Mrs. Delafield Wants to Marry' in 1986, 'The Man Upstairs' in 1992 and 'This Can't Be Love' in 1994.

Her health was deteriorating but she continued to work in movies as well as television and in 1981 she won a fourth Best Actress Oscar for her performance in 'On Golden Pond' with Henry Fonda. She made her final performances in 1994, with 'One Christmas', a TV movie from a story by Truman Capote, and 'Love Affair', unforgettably as Warren Beatty's difficult aunt.

In 1991 Katharine wrote her autobiography, "Me, Stories of My Life" and appeared in a TV film based on the book.

Katharine Hepburn died on June 29, 2003 of natural causes in Old Saybrook, Connetticut. She was 96. The lights of Broadway were dimmed for one hour in her honor.

1936
Mary of Scotland
A Woman Rebels

1938
Bringing Up Baby
Free to Live

1942
Woman of the Year
Keeper of the Flame

1969
The Madwoman of Chaillot