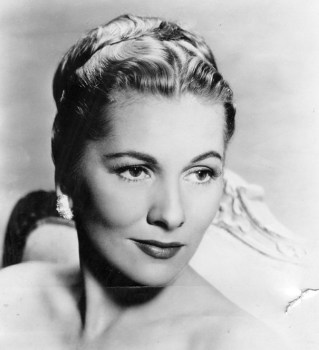 Joan Fontaine was a British American actress, the younger sister of actress Olivia de Havilland. She was famous for her polished performances in Hollywood movies of the 1940's and 1950's, and she was exceptional in Alfred Hitchcock's 'Rebecca' in 1940 and 'Suspicion' the following year.

She received three Academy Award nominations for Best Actress and won the award once for 'Suspicion'. As her movie career wound down in the 1960's Joan turned her talents to Broadway and television. She also had many non-acting interests including cooking, ballooning and golf.

She was born Joan de Beauvoir de Havilland in Tokyo, Japan on October 22, 1917 into a comfortably off middle class British family. Her parents were Walter de Havilland, a patent attorney practicing in Japan, and Lilian Augusta Ruse, a former stage actress.

Due to Joan's poor health, on the advice of a doctor, the family moved to Saratoga, California, when Joan was still a baby. Their father went back to his practice in Japan and he and Lillian divorced soon afterwards, when Joan was two. Lillian soon remarried, to a store manager George Fontaine, a strict disciplinarian, who was disliked by both his new stepdaughters, as much as they disliked each other.

Joan and Olivia had a difficult relationship as children with jealousy and squabbles and even fist fighting. According to Joan, Olivia could not get used to the idea of a younger sister competing for their mother's affections, and thus a lifetime of jealous rivalry was begun.

Joan was a very bright child with an IQ of 160 and she excelled at Los Gatos High School, Saratoga, where she went until she was fifteen. She then returned to Japan to stay with her father for a year, studying at the American School. On her return she began to take an interest in an acting career like her sister, who had also developed an interest in the theater.

Joan performed with various west coast stage companies using the name Joan Burfield as Olivia was already using the family name. 'Burfield' came from Burfield Street in Hollywood. Her stage debut was opposite May Robson in a 1935 production of 'Kind Lady'. She used the same name when she made her feature film debut with a small part in 'No More Ladies' ,also in 1935. For a while she also used the name Joan St. John until she took her stepfather's name, supposedly at the suggestion of a fortune teller who said it was a "success name".

Joan was soon signed up to a contract with RKO and in 1937 she found herself starring alongside Fred Astaire in his first RKO film without Ginger Rogers: 'A Damsel in Distress', but the movie failed at the box-office. She appeared in relatively minor roles in a number of movies over the next three years including with Norma Shearer and Joan Crawford in 'The Women' in 1939, but she did not make a strong impression, and when her contract expired in 1939 it was not renewed.

She became a star in 1940 when after a six-month series of film tests, she won the coveted role of the second Mrs de Winter in Alfred Hitchcock's Hollywood debut movie 'Rebecca'. She received rave reviews and a Best Actress Award nomination and although she lost out to Ginger Rogers in 'Kitty Foyle', she did win the Best Actress Oscar the following year for her superb performance in another Hitchcock film 'Suspicion'. Strangely, this was the only time Hitchcock directed an Oscar winning acting performance.

This was a golden time for Joan's career and she became more famous than her sister, despite the success of Olivia's performance in 'Gone With The Wind' in 1939. Joan continued with some strong romantic melodramas such as the popular 'This Above All' in 1942, 'The Constant Nymph' the following year, for which she received her third Academy Award nomination, 'Jane Eyre' in 1944, and 'Letter from an Unknown Woman' in 1948. In the same year Joan appeared with Bing Crosby in 'The Emperor Waltz' and then made more romance movies with 'September Affair' and 'Born to Be Bad' in 1950.

'Darling, How Could You!', also known as 'Rendezvous', made in 1951, was a disappointing movie but it marked the beginning of a new Joan Fontaine acting persona. Instead of playing the shy, well-bred ingénue as in most of her early movies, she began playing mature, more worldly women, often unpleasantly calculating as in 'The Bigamist' in 1953, 'Casanova's Big Night' in 1954, and 'Island in the Sun' in 1957.

By this time Joan was as interested in the jet-set lifestyle as she was in acting and she realised that there was more to life than being a movie star. She had many interests outside acting, including tuna fishing, fox hunting, golf, and even balloon racing (her team won a race in Holland). She was also a licensed pilot and and Cordon Bleu cook. After the late 1950's she made few films and spent a great deal of time absorbed in the European jet-setting social scene.

As her film career slowed down she began making appearances on television, on many panel games and as a guest star in such programs as 'Wagon Train' and 'The Bing Crosby Show' and also on the stage, winning excellent reviews for her 1954 role on Broadway in 'Tea and Sympathy'. She appeared also in Noel Coward's 'Private Lives' the stage production of Alfred Hitchcock's 'Dial "M" for Murder' and an Austrian production of 'The Lion in Winter'.

Joan continued working during the 1970's and she also joined the lucrative lecture circuit, giving talks to students and women's groups on subjects such as the romance between Robert and Elizabeth Barrett Browning. She continued her television work into the 1980's in series such as 'Ryan's Hope' for which she received an Emmy nomination, 'The Love Boat', and 'Hotel' and her last public screen appearance was as Queen Ludmilla in the TV film 'Good King Wenceslas' in 1994.

She also adopted a young Peruvian girl, Martita, in 1952 who ran away from home when she was seventeen. Both Martita and Joan's natural daughter, Debbie, were estranged from Joan. The well publicised feud between Joan and her sister, Olivia de Havilland, also continued and it is believed they had not spoken since 1975 although both women denied this.

Joan was a wealthy lady with interests in cattle farming, real estate and the oil industry. She lived a quiet retirement in Carmel, California spending her time tending her gardens, and looking after her dogs.

1950
September Affair
Born to Be Bad

1952
Something to Live For
The Tragedy of Othello: The Moor of Venice (uncredited)
Ivanhoe

1956
Serenade
Beyond a Reasonable Doubt

1957
Island in the Sun
Until They Sail