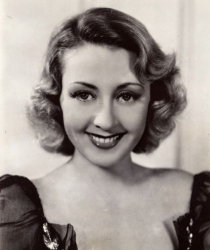 Joan Blondell was a beautiful, blonde, blue-eyed movie and stage actress who had a long career, appearing in over 80 movies and then transferring very successfully to the Broadway stage and to television. She became famous on screen first as a pre-Code, feisty, brassy blonde, but later her image changed to straight comedy and more mature, thoughtful dramatic roles.

In 1952 she received an Academy Award nomination for Best Supporting Actress for her performance in 1951s The Blue Veil. She was a great favorite with the public and she appeared in more Warner Brothers movies than any other actress.

She was born Rose Joan Blondell in New York City on August 30th, 1906. She had a younger sister, Gloria, who also became an actress. Show business was in her blood as her father, Eddie, was a vaudeville comic, and her early years were spent moving from place to place as her family followed the vaudeville circuit in America. They also made several tours abroad performing in Europe and Australia. When Joan was twelve they eventually settled in Dallas, Texas and five years later, using the name Rosebud Blondell Joan became a Beauty Queen, winning the Miss Dallas competition and coming a creditable fourth in the Miss America competition.

After attending a teachers training college at Denton, Texas, Joan began work first as a fashion model, then as a clerk in a New York Department Store, until 1923 when, aged 17, she began her acting career, changing her name again to Joan, her middle name. After a period as a showgirl with the Ziegfeld Follies, she joined a stock company in New York and made numerous appearances on Broadway. As well as great beauty she had unquestionable talent, and by 1930 she was appearing on Broadway with the young James Cagney in the play Penny Arcade.

They attracted the interest of Warner Brothers movie studio who took the couple to Hollywood and put them both under contract. They were given the lead roles in Sinners Holiday, the movie version of Penny Arcade and the film was a great success, resulting in several more films together including The Public Enemy and Larceny Lane, both in 1931.

Joan became a Warner Brothers regular. She never became a regular leading lady but developed a reputation as a good, dependable actress who would never turn down a role. During the early 1930s she became one of the highest paid individuals in the country and she became famous for her delivery of the patriotic song "Remember My Forgotten Man" in Gold Diggers of 1933, one of her few leading roles, co-starring with Ruby Keeler and Dick Powell.

For the remainder of the decade she was kept very busy by Warner Brothers, paired first with Glenda Farrell playing happy go lucky, fast -talking young girls in theGold Digger series of films. As well as Gold Diggers of 1933, and Gold Diggers of 1937 these included Havana Widows in 1933, I've Got Your Number in 1934, and Traveling Saleslady, We're in the Money and Miss Pacific Fleet in 1935. During the 1930s and early 1940s Joan also appeared in a total of ten musicals with Dick Powell, including Convention City in 1933, Dames the following year, Broadway Gondolier in 1935, and Stage Struck in 1936.

In 1939 Joan left Warner Brothers to become more independent and the nature of her roles began to change. Instead of being the ambitious, wisecracking career girl she took on character roles, always in support of the main performers, never in the lead. Some of her movies were big improvements on her earlier fare, such as Cry Havoc in 1943 and the brilliant A Tree Grows in Brooklyn directed by Elia Kazan in 1945. In 1951 she was nominated for a Best Supporting Actress Oscar for her tear-jerking performance in The Blue Veil and for the rest of her career Joan continued to gain accolades for her work in quality films such as The Opposite Sex in 1956, Desk Set and Will Success Spoil Rock Hunter? in 1957 and The Cincinnati Kid in 1965 for which she gained a Golden Globe nomination for Best Supporting Actress. She appeared in two hit films in the late 1970s, Grease in 1978 and The Champ in 1979 and finished her movie career with a good performance in a bad film about transexuality, The Woman Inside in 1981.

From the early 1950s and for the rest of her career, Joan embraced the new medium of television and appeared regularly in drama series such as Fireside Theater, and Playhouse 90 and made many guest appearances in popular series such as Dr Kildare, Petticoat Junction and The Love Boat. She was also a regular in Here Comes the Bride in the late 1960s and Banyon from 1972-73.

Joan married three times. Her first marriage, from 1933 to 1936, to George Barnes, a well known cinematographer, produced one son, Norman, who later became a respected television executive. In 1936 Joan married for a second time, to director and musical actor, Dick Powell. They had a daughter, Ellen, and Powell adopted Norman, her son from her marriage to George Barnes. Joan and Dick Powell divorced in 1944 and Joan married for a third time in 1947 to producer, Mike Todd. Todd was a big spending gambler and was declared bankrupt during their marriage. Joan left him and they divorced in 1950, years before he met and married Liz Taylor.

Joan Blondell died of leukemia on December 25, 1979, in Santa Monica, California. She is buried at Forest Lawn Cemetery in Glendale, California.

1931
How I Play Golf, by Bobby Jones No. 10: 'Trouble Shots' (short) (uncredited)
Other Men's Women
Millie
Illicit
Too Many Women
The Public Enemy
My Past
Big Business Girl
Night Nurse
The Reckless Hour
Larceny Lane

1939
Unfit to Print
East Side of Heaven
Orphan of the Ring
Good Girls Go to Paris
The Amazing Mr. Williams

1940
Choose Your Partner
The Tragedy of Divorce

1957
Lizzie
Desk Set
This Could Be the Night
Will Success Spoil Rock Hunter?