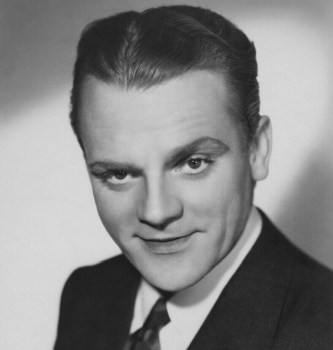 
James Cagney was an inspirational actor who became a legend and his is one of the best-known names from the Golden Age of Hollywood. In a long career of over five decades from the 1930s to the 1980s, James Cagney worked with generations of different actors in a wide variety of roles. He is best known for his gangster movies but he also gave a memorable performance as the song and dance man George M. Cohan in 'Yankee Doodle Dandy' in 1942 for which he received the Academy Award for Best Actor.

He was nominated twice more for the award and in 1999 he was ranked eighth among the Greatest Male Stars of All Time by the American Film Institute. He was one of the founders of the Screen Actors Guild and its president from 1942-44. In 1984, he received the U.S. government's highest civilian honor, the Medal of Freedom.

James Cagney was born James Francis Cagney, Jr. on July 17, 1899, the second of seven children, two of whom died as babies. His father was Irish American and his mother Norwegian, and he was raised on New York's tough Lower East Side. As a young man Cagney was a street fighter who became a good amateur boxer and was runner-up in the New York State lightweight title. He was encouraged by his coaches to turn professional but was talked out of it by his mother.

The family were not well off and young Cagney had to go out to earn a living in any way he could. As a teenager he worked as a waiter, poolroom racker, book custodian at the Public Library, bellhop and night porter.

After graduating from Stuyvesant High School in 1918, he joined the College of Columbia University to study art but had to drop out after one term when his father died in the 1918 flu pandemic. His first acting connection came through his brother, Harry, who was interested in amateur dramatics. At first James worked backstage but after standing in when his brother was ill he became interested in performing and he subsequently joined and acted in a number of Amateur Dramatic companies.

His professional debut came in 1919 when he successfully auditioned for a vaudeville troupe as a dancer using a tap dancing skill he had learned as a boy, and his first paid role was as a chorus girl in the all-male revue, 'Every Sailor'. In 1920 he obtained his second vaudeville role, this time on Broadway in the show 'Pitter Patter' . Also in the show was chorus girl from Iowa, Frances Willard Vernon, known as Billy. She and Cagney married two years later. For several years he and Billy toured the vaudeville circuit, sometimes in separate revues and sometimes as a double act, Vernon and Nye. In the mid 1920's Cagney switched from vaudeville to straight acting and played the lead role in several Broadway plays.

At this time Cagney also started up and ran a dance school for professional dancers. His methods drew many appreciative pupils and as a result he was appointed choreographer, as well as performer in 'Grand Street Follies of 1928'. The show, and its sequel, 'Grand Street Follies of 1929' was a great success. These roles led to parts in two plays opposite the up-and-coming actress, Joan Blondell, 'Maggie the Magnificent' and 'Penny Arcade'.

The stage play 'Penny Arcade' was not well received but the critics loved the performances of Cagney and Blondell and they were teamed up again for the movie version, retitled 'Sinners' Holiday' which came out in 1930. On the strength of his performance in the movie Warner Brothers gave Cagney a seven year contract.

Cagney's next few films helped to cement his growing reputation but it was his fifth film for Warners which made his name and which propelled him into the big time. 'The Public Enemy', a realistic gangster film, was made in 1931 and was a major hit. The scene where he thrusts a grapefruit into Mae Clarke's face has been described as one of the most famous in movie history, the moment when the gangster movie came alive.

During this period, Cagney's reputation rose steadily and by 1935 he was listed as one of the Top Ten Moneymakers in Hollywood. He was now an established star and was offered a greater variety of roles. For instance in 1935 he played a lawyer in 'G-Men' and then he appeared in his only Shakespearean role as Bottom in 'A Midsummer Night's Dream'. In 1942 he gave a tour-de-force performance as George M. Cohan, the multi-talented entertainer (writer of "Give My Regards to Broadway," and "Over There"), in 'Yankee Doodle Dandy', for which he won the Best Actor Academy Award and a Critics Circle Best Actor Award.

In 1942, after numerous financial disputes with Warner Brothers, Cagney and his brother, William, formed Cagney Productions and broke away from the studio. The new company made four films, trying to keep away from the Cagney 'tough guy' image but none of them did well and the final one 'The Time of Your Life' in 1946 was a financial disaster. Cagney was forced back to the Warner Brothers fold and in his next movie played a gangster role once more. 'White Heat' in 1949 was a critical and financial success and in the psychotic Cody Jarrett an unforgettable movie character was created.

Cagney continued to star in successful movies through the 1950's although less in number. In 1955 'Love Me or Leave Me', for which he received another Best Actor Academy Award nomination, and 'Mister Roberts' (with Henry Fonda and Jack Lemon) were memorable and 'The Gallant Hours' in 1960 was another success. After the disappointing Billy Wilder directed farce 'One, Two, Three' in 1961 Cagney retired from the movies.

For the next two decades he relaxed, spending the summers in Los Angeles and the winters on his Dutchess County, N.Y. ranch, indulging his hobbies of painting, swimming, playing tennis, and writing poetry. When his health began to decline and he started suffering from circulatory problems and diabetes, he was persuaded by his doctors, that film work would be good for him. He had been turning down scripts for years but he finally agreed to make one more movie in 1981, playing a small, but important part in in Milos Forman's 'Ragtime'. Cagney made one more public appearance, on TV as an ex-prizefighter in 'Terrible Joe Moran' in 1984, before finally retiring completely.

Cagney was married once, to actress Frances Willard (Willie) Vernon in 1922. The couple adopted two children, James Jr. and Cathleen and the marriage lasted 64 years until Cagney's death.

James Cagney died on 30 March 1986, in Stanfordville, New York, of a heart attack following illness from diabetes. He was 86. He was interred at Gate of Heaven Cemetery in Hawthorne, New York.

1930
Sinners' Holiday
A Handful of Clouds

1936
Ceiling Zero
Pluck of the Irish

1937
Something to Sing About

1939
The Oklahoma Kid
Each Dawn I Die
The Roaring Twenties

1942
Calling All Girls
Captains of the Clouds
Yankee Doodle Dandy

1943
The Voice That Thrilled the World
You, John Jones!
Johnny Vagabond
Show Business at War

1956
Tribute to a Bad Man
These Wilder Years

1957
(uncredited)
Man of a Thousand Faces
Short Cut to Hell

1959
Shake Hands with the Devil