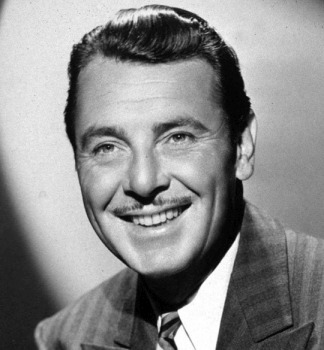 George Brent was an Irish actor who played the dapper, sophisticated leading man to most of Hollywood's top actresses in the 1930s and 1940s. Most of his 100 movie career was spent at Warner Brothers, where he worked from 1932 to 1942. He was the favorite leading man of Bette Davis with whom he had a long lasting affair and with whom he made eleven films.

He was born George Brendan Nolan in Ballinasloe, County Galway, Ireland on March 15, 1904. Little is known of his childhood and much of his supposed story was manufactured by the Warner Bros Publicity Department to make him more interesting to the public. What is for sure is that he left school in 1919 and then was in some way as a teenager involved with the emerging IRA during the War of Irish Independence between 1919 and 1922.

He supposedly had to flee Ireland with a reward set by the British government for his capture. At all events he ended up in America in 1921 and began his career as an actor.

Brent learned his new profession on the stage, working for stock companies in New York and along the East Coast. His first lead role was in 1923 in the touring version of 'Abie's Irish Rose' which established the record for the longest running touring company production for nearly 40 years until 'Hello, Dolly!' in the 1960s

Brent made his first film, 'Under Suspicion', in 1930 and after several minor movies with Universal Studios, his potential as a leading man was recognised by Warner Bros. and he signed a contract with them in 1932. He began to make numerous films in which he played the same sort of role - the suave, gentlemanly foil to the glamorous, and usually strong, female star.

One of his early films with his new employers was 'The Rich Are Always with Us' in 1932 in which he starred opposite Ruth Chatterton. It was the first of four films he made with the actress whom he married in the same year.

Brent's first major hit was opposite Ruby Keeler and Bebe Daniels in '42nd Street' in 1933, a highly successful musical which was nominated for the Best Picture Oscar. It was the start of a very successful period of over twenty years at the top of his profession, playing opposite the top female stars in Hollywood.

He was the most frequent co-star of Bette Davis, appearing with her in thirteen films including 'Front Page Woman' in 1935, 'Jezebel' in 1938, 'Dark Victory' the following year and 'The Great Lie' in 1941. He also played opposite such established female stars as Greta Garbo in 'The Painted Veil' in 1934, Ginger Rogers in 'In Person' in 1935, Jean Arthur in 'More Than a Secretary' in 1936 and Myrna Loy in 'Stamboul Quest' in 1934 and 'The Rains Came' in 1936. His successes continued in the 1940s when he starred with Merle Oberon in ''Til We Meet Again' in 1940, Ann Sheridan in 'Honeymoon for Three' the following year, Joan Fontaine in 'The Affairs of Susan' in 1945, Barbara Stanwyck in several movies including 'My Reputation' in 1946, Claudette Colbert in 'Bride For Sale' 'Tomorrow is Forever' in 1946 and Yvonne de Carlo in 'Slave Girl' in 1947.

Brent was an accomplished pilot and when he was unable, because of his age, to enlist in the armed forces in 1942, he temporarily retired from movies to become a flying instructor, which he continued to do for the duration of the war. When he resumed his career after.the war he never recaptured his former popularity. After some disappointing, second rate pictures in the early 1950s, Brent retired from movie making in 1953.

Brent was a handsome man who enjoyed female company. He had affairs with many of his female co-stars including Greta Garbo, Merle Oberon, Loretta Young and Olivia de Havilland. He had a long relationship with Bette Davis between 1939 and 1940. He also found time to have five marriages.

His first marriage was in 1925 to Helen Campbell. The couple divorced in 1927. He had another 2 year marriage from 1932-1934 to actress Ruth Chatterton and two more very short marriages to actresses Constance Worth in 1937 and Ann Sheridan in 1942. Finally he married model and dress designer, Janet Michaels in 1947 and the marriage lasted until his death. Their marriage produced a son and a daughter.

George Brent suffered from advanced emphysema later in life and he died on May 26, 1979 in Solana Beach, California.

1932
So Big!
The Rich Are Always with Us
Working Wives
The Purchase Price
Miss Pinkerton
The Crash
The Way of Life

1936
Snowed Under
The Case Against Mrs. Ames
The Golden Arrow
Sweet Aloes
More Than a Secretary

1947
Out of the Blue
The Corpse Came C.O.D.
Slave Girl
Christmas Eve

1948
Luxury Liner
Drums Along the Amazon