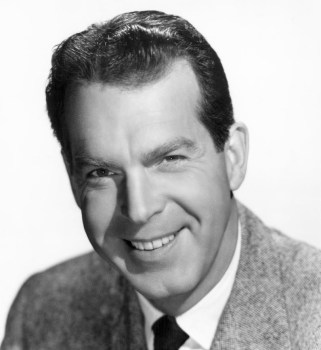 Fred MacMurray is best remembered today for his portrayal of wholesome and kind father-figures in smash-hit Disney movies such as 'The Absent-Minded Professor; in 1961 and 'Son of Flubber' in 1963, but during his long and extremely successful movie career MacMurray consistently worked with some of Hollywood's biggest names, such as actors Humphrey Bogart, Claudette Colbert, and Katharine Hepburn and directors Billy Wilder and Preston Sturges.

Time and again he proved himself to be a talented and versatile performer in a variety of genres. For instance, early in his career he played an upper class romantic lead opposite Katharine Hepburn in 'Alice Adams' in 1940 and he went on to portray a cold-blooded killer in 'Double Indemnity' in 1944, a self-seeking army officer in 'The Caine Mutiny' in 1954, and a lecherous romeo in 'The Apartment' in 1960.

Later in his career, as well as his Disney successes, he became well known for his television appearances, particularly for his portrayal of Steve Douglas, the father in 'My Three Sons', which ran for 12 years from 1960.

Fred MacMurray was born Frederick Martin MacMurray on August 30, 1908 in Kankakee, Illinois. His father was a concert violinist, who died when Fred was five. Fred himself was very musical and became a notable saxophone player.

When MacMurray was five years old, he moved with his family to Beaver Dam in Wisconsin, where his mother came from. In 1926 he began attending Beaver Dam High School where he excelled at sports, particularly basketball, baseball and football.

MacMurray went on to study at the Carroll College in Wisconsin where he played in orchestras and also sang to earn his college-tuition fees, and had occasional roles as an extra in movies. He then joined a vocal ensemble, the California Collegians, and went to New York, where, in 1930, he appeared for the first time on Broadway in 'Three's a Crowd' starring Sydney Greenstreet, Clifton Webb and Libby Holman.

After a stint on the vaudeville circuit he worked with Bob Hope in 'Roberta' in 1933. The show made Hope a star and it also helped to make MacMurray a Hollywood actor as he was signed up the following year to a seven year contract with Paramount Pictures.

MacMurray worked steadily and became a well known Hollywood face during the 1930's. Although most of his early movies were very average, he earned a well-deserved reputation as a dependable, talented actor and he did appear in some very successful movies. In 1935 he co-starred with Claudette Colbert in 'The Gilded Lily', the first of seven movies they made together and in the same year he also appeared as Katharine Hepburn's love interest in the classic movie, 'Alice Adams' and with Carole Lombard in 'Hands Across the Table'. He developed his clean-cut reputation early and in 1939 artist C.C. Beck used him as as a model for a character who later became known as the comic strip Captain Marvel.

His career continued to prosper and he went on to spend almost the rest of his career as a smiling, dimpled-chin 'Mr.Nice Guy', ranging from preppy heirs, as he had been in 'Alice Adams' through to emasculated clods:as a male secretary in 'Take a Letter, Darling' in 1942, and "first Husband" to a female U.S. president in 'Kisses for My President' in 1964.

He also did turns as a Disney scientist in 'The Absent-Minded Professor' in 1961 and 'Son of Flubber' in 1963.

He showed his talents best when, unusually, he was cast against type, as the bad guy. In 1944 in Billy Wilder's 'Double Indemnity' he plays Walter Neff, an insurance salesman who plots with a greedy housewife played by Barbara Stanwyck to murder her husband. In 1954 in 'The Caine Mutiny' he plays the role of the duplicitous Lieutenant Thomas Keefer and in the Oscar-winning comedy 'The Apartment' in 1960, again directed by Wilder, he plays a two-timing corporate executive opposite Shirley MacLaine and Jack Lemmon.

In the 1960's, at the same time as making his successful Disney movies, MacMurray became a television star as the archetypal sitcom father, widower Steve Douglas, with the series 'My Three Sons', which ran from 1960 to 1972, one of the longest running television series.

When the series was cancelled in 1972 MacMurray made just two more movies, 'Charley and the Angel' in 1973, and 'The Swarm' in 1978 before retiring to his golf. He was one of Hollywood's finest golfers and often played with his friends Jimmy Stewart, Bob Hope and Bing Crosby.

In 1941, MacMurray purchased a sprawling ranch in Northern California and ran it as a working cattle ranch, producing prize winning Aberdeen Angus steers. Fred had a reputation for being frugal with his money. In 1943 was the highest earning actor in Hollywood and he invested wisely, becoming one of Hollywood's wealthiest men.

MacMurray married dancer, Lillian Lamont on June 20, 1936, and they adopted two children. The marriage ended with her death from cancer in 1953. In 1954 he married actress June Haver and the couple adopted twin daughters. The marriage was one of Hollywood's longest, ending after 37 years with Fred's death.

Fred MacMurray died of pneumonia in Santa Monica, on November 5, 1991. He was eighty-three. He was buried in the Holy Cross Cemetery in Culver City.

1945
Where Do We Go from Here?
Captain Eddie
Murder, He Says
Pardon My Past

1947
Suddenly It's Spring
The Egg and I
Singapore

1952
Atomic Energy Can Be a Blessing (Short)

1953
Fair Wind to Java
The Moonlighter

1955
The Far Horizons
The Rains of Ranchipur
At Gunpoint

1964
Kisses for My President