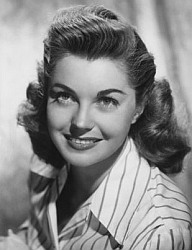 Esther Williams was a major movie star in the 1940's and 1950's, after being a champion swimmer in her younger days. She specialised in spectacular swimming based movies known as "aquamusicals", which featured elaborate synchronized swimming sequences and spectacular diving. Her name is no longer so well known now but for five years from the end of The Second World War, Esther had at least one film in the list of the 20 highest grossing films of the year and she became known as the Hollywood Mermaid.

After retiring from movie making in the 1960's, Esther became an highly successful business woman selling her own brand swimming costumes and accessories and instructional swimming videos for children. In 1966, she was inducted into the International Swimming Hall of Fame.

She was born Esther Jane Williams on August 8, 1921 in Inglewood, California, the youngest of five children. She learned to swim when she was young and grew up swimming in local pools and surfing at nearby beaches. She suffered a traumatic personal losss when she was was eight, when her older brother, Stanton, an aspiring actor, died at the age of sixteen. Swimming became even more important to her and she worked part time counting towels at a swimming pool near her house to earn free swimming time. Whilst there, she had swimming lessons from the lifeguards and showed a great natural ability and athleticism.

By 1937, when she was 16, Esther was swimming for the Los Angeles Athletic Club swim team and she won three U.S. National championships in breaststroke and freestyle. She was selected for the US national team for the 1940 Tokyo Olympics, but her hopes were dashed when the games were cancelled at the start of World War II.

Anxious to keep her amateur status, Esther took a job to make ends meet at the upmarket I. Magnin department store. Her job included modeling swimsuits and it was not long before her athletic, long legged figure and fresh faced good looks got her noticed. She was asked by producer and impresario, Billy Rose, to audition for his 'Aquacade' water spectacular in San Francisco. She landed the starring role opposite Johnny Weissmuller, then at the peak of his fame from the successful Tarzan film series.

The success of the 'Aquacade' led in 1941 to a contract with MGM and a period of intensive acting coaching. Her first movie was 'Andy Hardys Double Life' in 1942, opposite Mickey Rooney followed by a small part in 'A Guy Named Joe'. Her star quality was evident and MGM created a whole new type of "aqua" movie to exploit her gifts. Her first swimming movie was 'Bathing Beauty' in 1944 and a special "camera friendly" pool was built on the MGM lot, with purpose built hydraulic lifts, fountains and high level camera cranes.

'Bathing Beauty' was a smash hit and Esther became a major Hollywood star as well as a pin up favorite with GI's returning after World War II. She appeared in many successful and lavish "water musicals" over the next 2 decades, such as 'This Time for Keeps' in 1947, 'On An Island With You' the following year, and 'Neptune's Daughter' in 1949, appearing in 26 movies in all.

She made a number of non water-based films, such as 'Take Me Out to the Ball Game' in 1949, with Frank Sinatra and Gene Kelly but it was her swimming and diving prowess and the way she filled out a swimming costume that made her incredibly popular. A lasting by-product of her fame was the increased popularity of synchronised swimming competitions.

As the popularity of the MGM musical declined in the 1950's, Esther appeared in dramatic roles in movies such as 'The Unguarded Moment' in 1956 and 'The Big Show' in 1961 but she was never as successful as in her swimming roles. She made occasional television appearances in programs such as 'What's My Line?', and 'Zane Grey Theater' and performed in two aquatic specials, The Esther Williams Aqua Spectacle in 1956 and Esther Williams at Cypress Gardens in 1960. Her final film appearance was in a Spanish production, 'La fuente mágica' in 1963 after which she retired from the movie industry.

After her retirement from movies Esther became a very successful businesswoman, acting as specialist advisor to the Esther Williams Swimsuit Collection, and fronting a company that manufactures swimming pools and pool accessories. She also produced swimming videos, which helped parents teach their children how to swim and she worked with a program that teaches blind children how to swim. She did not completely lose touch with the media and in 1984 she worked as commentator for the synchronised swimming in the Los Angeles Olympics and 10 years later she appeared in the MGM 'That's Entertainment' compilation movie.

Esther was married four times, firstly from 1940-44 to medical student Leonard Kovner, then in 1945 she was married to singer and actor Ben Gage, with whom she had three children. She claimed that Gage was an alcoholic who squandered most of her earnings and they separated after 7 years and divorced a further 7 years later in 1959.

After her separation from Gage, Esther had affairs with some of her costars, including Victor Mature and Geoff Chandler. In 1969 she married the Argentine actor, Fernando Lamas, with whom she remained until his death in 1982.

In 1994 she married actor Edward Bell, with whom she lived quietly in Beverly Hills. Esther Williams died on June 6th, 2013.

1945
Thrill of a Romance
Ziegfeld Follies

1949
Take Me Out to the Ball Game
Neptune's Daughter
Some of the Best: Twenty-Five Years of Motion Picture Leadership (uncredited)

1953
Dangerous When Wet
Easy to Love