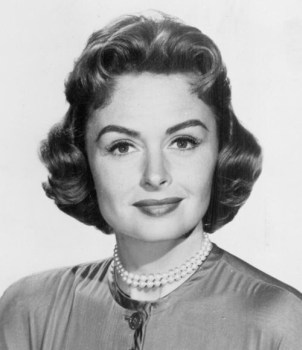 Donna Reed was a film and television actress who became well known for her role as Mary Bailey, the screen wife of James Stewart, in ‘It’s a Wonderful Life’ in 1946. She received an Oscar for Best Supporting Actress for her role in 1953’s ‘From Here to Eternity’ and became a well known face on television with her own program, ‘The Donna Reed Show’, which ran for eight years from 1958. In the 1960's she became involved in a peace movement organization, known as 'Another Mother for Peace'.

Donna Reed was born Donna Belle Mullenger on January 7, 1921, in Denison, Iowa, the eldest of five children. She and her siblings were brought up on the family farm and Donna attended the local Denison High School, planning to emulate her mother and make a career as a teacher. She won a beauty contest in Denison and moved to Los Angeles where she attended Los Angeles City College.

She appeared in several productions of the college dramatic society and became the college Campus Queen which resulted in her photo appearing in the Los Angeles papers. The publicity led to several offers of a screen test from different Hollywood movie studios but Donna, strong-minded and determined, refused all offers until she had completed her education with an associate's degree. She eventually agreed to a test at Metro-Goldwyn-Mayer and was signed to a seventy-five-dollar-a-week contract in 1941.

Her first movie appearance was as in 'The Getaway' in 1941. She was billed as "Donna Adams" in her first few movies but this was soon changed to "Donna Reed". She gained experience with small roles in numerous movies over the next few years including 'Babes on Broadway' in 1941, 'The Courtship of Andy Hardy', 'Calling Dr. Gillespie' and 'Apache Trail' the following year, ' The Man from Down Under' in 1943 and in 1944.

Donna's name gradually became better known and she became one of the servicemen's most popular pinups during World War II. She conscientiously answered many of the G.I.'s letters personally.

By the middle of the 1940's Donna was being offered leading roles such as in 'The Picture of Dorian Gray' in 1945 and she became one of Hollywood's top actresses . She was already being typecast as the sweet, loving romantic interest, everyone's favorite girl-next-door.
'It's a Wonderful Life' 1946
Donna became part of Hollywood's upper echelon with the release of 'It's a Wonderful Life' in 1946 in which she co-starred with top Hollywood names such as James Stewart, Lionel Barrymore and Thomas Mitchell. Donna played her usual role as the loving girlfriend and then wife of James Stewart and although the film was not warmly received on release, it has now become a classic, shown on television every Christmas.

Donna's career continued with two well received movies, 'Beyond Glory' in 1948, with Alan Ladd, and the dramatic 'Chicago Deadline' the following year'. She made fewer films but invariably had her usual "nice girl" leading roles, as in 'Idols in the Dust' in 1951 and 'Hangman's Knot' in 1952.

'From Here to Eternity' 1953
Her perceived image changed dramatically when she played the role of prostitute, Alma "Lorene" Burke in 1953's 'From Here to Eternity'. The movie was a huge success, gaining thirteen Academy Award nominations and winning eight Oscars including the Best Supporting Actress Award for Donna.

After 1953 Donna's movie career proved to be something of an anti-climax. The plum roles which should have materialised after an Oscar success, never appeared and apart from a bizarre appearance as a Native American girl in 'The Far Horizons' in 1955, Donna was still typecast in her role as the wholesome, clean-cut American girl for the rest of her career.

Donna first appeared on television in 1954 in 'The Ford Television Theatre' and she continued in the new medium with successful guest appearances in programs such as 'Tales of Hans Anderson' in 1955 and 'General Electric Theater' in 1957. She was offered by ABC-TV a starring role in her own series, 'The Donna Reed Show', which premiered in September, 1958, and was an instant hit.
The Donna Reed Show 1958
The show was produced by her husband, Tony Owen, and Donna played the calm, problem-solving mother figure. The show ran for eight seasons and Donna received four consecutive Best Actress Emmy nominations between 1959 and 1962. She also won a Golden Globe Award in 1963 for best female television star. Donna ended up a far more popular figure on television than on the big screen.

By the spring of 1966, after eight years and 275 episodes, Donna decided to take a break from show business in order to spend more time with her growing family. For thirteen years she shunned movies, refused guest appearances on television and expressed no inclination to take on another series. She devoted much of her leisure time to travel and photography and she also became more active politically.

In 1967 she co-founded, along with Barbara Avedon, a former writer for 'The Donna Reed Show', the influential organisation, "Another Mother for Peace", which was a protest movement against the Vietnam war. She was an active member of the group and also became a prominent campaigner for nuclear disarmament.

After her long break Donna returned to acting with two made-for-television movies, 'The Best Place to Be' in 1979 and 'Deadly Lessons' in 1983. In 1984 she appeared in two episodes of the series 'The Love Boat' which led, in the same year, to her being hired for the television series 'Dallas' to play the important role of Miss Ellie Ewing as a replacement for Barbara Bel Geddes, who was ill.

The new appointment worked well and in 1985 Donna was signed to a two year contract, but when Bel Geddes recovered her health and was reinstated, Donna was swiftly fired. She was infuriated and she sued the producers, CBS, for breach of contract, later settling out of court for over $1 million.

In 1945 she married movie and television producer, Tony Owen, who produced 'The Donna Reed Show'. The couple had four children two of their own and two adopted. They divorced in 1971.

She married her third husband, army colonel, Grover Asmus, in 1975, the marriage ending with her death.

Donna Reed died in Beverly Hills on January 14, 1986 from pancreatic cancer. She was buried in the Westwood Village Memorial Park Cemetery in Los Angeles. She was 64 years old.

One Win:
Best Supporting Actress ... From Here to Eternity (1953)
No Unsuccessful Nominations:

1941
The Getaway
Shadow of the Thin Man
Babes on Broadway

1945
The Picture of Dorian Gray
They Were Expendable

1946
Faithful in My Fashion
It's A Wonderful Life