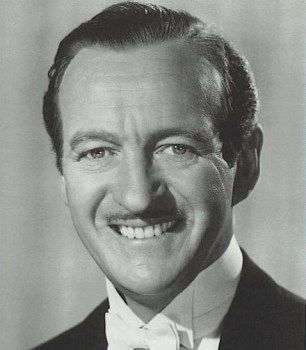 David Niven was an English actor and raconteur of immense natural charm who moved to Hollywood in 1934 and became well known as a fine comic actor and for portraying a genteel Englishness in movies such as 'A Matter of Life and Death' in 1946 and 'Around the World in 80 Days' in 1956. He won an Academy Award for Best Actor for his performance in 'Separate Tables' in 1958. Later in his career he became well known as a novelist with the best-selling autobiographical novels, 'The Moon's A Balloon' and 'Bring on the Empty Horses'.

David Niven was born James David Graham Niven on 1 March 1910 , the youngest of four children of a well to do army family. His father was killed in the First World War. After being expelled from his first public school for persistent misbehaviour, Niven settled into Stowe public school followed by the Royal Military College at Sandhurst. On graduation he served for two years in Malta with the Highland Light Infantry.

He found life in the British Army between the wars too stifling and in 1933 he resigned his commission after 6 years' service. He made his way to America and began his commercial life as a whisky salesman in New York. The following year, after spending some time in Mexico, working as a gun cleaner for visiting American hunters, he arrived in Hollywood, just as the golden age was getting into its stride. Niven and the rapidly developing Hollywood of the 1930s and 1940s were made for each other.

Niven began his Hollywood career as an extra and appeared uncredited in several films, including 'Without Regret', 'Barbary Coast' and 'Mutiny on the Bounty', all in 1935. He came to the attention of film producer Sam Goldwyn who signed him to a long term contract and gave him parts which allowed him to develop his obvious potential. Between 1935 and 1939 Niven appeared in 19 films, initially in important supporting roles as in 'The Charge of the Light Brigade' in 1936, with his friend, Errol Flynn, 'The Prisoner of Zenda' in 1937 and 'Wuthering Heights' in 1939. These roles firmly established him as a Hollywood star and he was leading man to Ginger Rogers in the 1939 comedy 'Bachelor Mother' and in the same year he starred as Raffles in the film of that name.

With the outbreak of world War II, Niven returned to military service in Britain. During the war he was temporarily released from his contract with MGM and allowed to make two propaganda films, 'The First of the Few' in 1942, with Lesley Howard, and 'The Way Ahead' in 1944, co-starring Stanley Holloway.

For the rest of his life he was uncharacteristically reticent about his war service. He joined one of the Marine Commando Phantom units, working on liaison between the front line and HQ, and he almost certainly spent time behind the enemy lines in occupied Belgium and France. He was involved with the D-day landings and the final Allied push through Germany. By the end of the war he had risen to the rank of lieutenant-colonel. When he eventually returned to America he was awarded the highest honour a non American can earn when he was invested as a Legionnaire of the Order of Merit. It was no mean achievement.

Niven's career resumed after the war with one of his best scripts to date in the witty and moving 'A Matter of Life and Death' in 1946, (released in the United States as 'Stairway to Heaven') in which Niven plays a British airman who miraculously cheats death and then falls in love with the girl of his dreams.

He continued his success with starring roles in 'The Bishop's Wife' in 1947 and 'Enchantment' the following year, both of which were well received and in 1950 he had another starring role in 'The Elusive Pimpernel', (released later in the US as 'The Fighting Pimpernel'.)

After making two further movies for MGM, 'The Toast of New Orleans' in 1950 and 'Soldiers Three' in 1951, Niven's contract with the studio ran out and he went freelance for the rest of his career. He was for several years frozen out by most Hollywood studios, due partly to series of disagreements with Sam Goldwyn and partly to Niven's demands for money commensurate with his star status. In the first half of the 1950s he made a number of fairly ordinary movies for British studios, such as 'Appointment with Venus' and 'The Lady Says No'in 1951. A notable exception to this mediocrity was 1953's 'The Moon is Blue' directed by Otto Preminger, for which Niven won a Golden Globe for Best Actor - Musical/Comedy.

Niven had an active career as a television performer, running parallel to his movie activities, beginning as early as 191 and he also became the part owner of the Four Star TV production company in partnership with Dick Powell, Charles Boyer and Ida Lupino. He became one of the first Hollywood actors to appear regularly on the new medium in programs such as 'Robert Montgomery Presents' and 'Celanese Theatre' in 1952 and he appeared many times between 1952 and 1956 in 'Four Star Playhouse', the series produced by his own company. Four Star was extremely successful and made Niven a great deal of money in 1956 when it was bought out by Official Films.

' In 1956 Niven starred in one of his best known films, the epic 'Around the World in 80 Days', as Phileas Fogg, a stuffy Victorian Englishman. The movie was a major success, winning five Academy Awards including Best Picture. Two years later Niven appeared in two high quality movies opposite Deborah Kerr, first playing a philandering playboy in 'Bonjour Tristesse' and then winning an Oscar for Best Actor for his brilliant portrayal of a lying and hypocritical English major in 'Separate Tables', also co-starring Burt Lancaster and Rita Hayworth.

Niven's television career continued through the rest of the 1950s in drama series such as Alcoa Theater and Goodyear Theater and he played host and actor in his own show for NBC "The David Niven Theater" which ran for 13 episodes in 1959. During the 1960s as well as continuing to appear in drama series such as 'Burkes Law' in 1963, he partnered Charles Boyer from 1964 to 1965 in a recurring role as a retired con artist in 'The Rogues' series, which won a Golden Globe for Best TV Show.

Niven appeared opposite Doris Day in the popular comedy 'Please Don't Eat the Daisies', in 1960 and then made two more memorable films with 'The Guns of Navarone' in 1961, and 'The Pink Panther' in 1963, but then for more than a decade he made very few movies which were other than eminently forgettable.

Exceptions to the general level of mediocrity in this period were 'Murder by Death' in 1976, a clever parody of the detective thriller genre, 'Death on the Nile' in 1978, and 'The Sea Wolves' in 1980, with Gregory Peck and Roger Moore.

Niven had an immense personal charm and developed a reputation as one of the most entertaining of companions. He was a magnificent raconteur and he channelled his great talent for storytelling into a successful career as an author. After an early novel in 1951 called "Round the Rugged Rocks", which sank without trace, he wrote two best-selling autobiographies which described his life and career in the golden era of Hollywood: "The Moon's a Balloon" in 1971 and "Bring On the Empty Horses" in 1975. He published another novel in 1981, "Go Slowly, Come Back Quickly" about an RAF pilot and an actress which was moderately successful. He was writing a third novel at the time of his death.

Niven can certainly be described as a ladies' man and he had many affairs as a young actor in Hollywood. He and Errol Flynn had some riotous times in the mid 1930's when they shared a house which became known as "Cirrhosis on Sea".

He married twice, firstly in 1940 to Primula Susan Rollo with whom he had two sons. She was undoubtedly the love of his life and it was a major tragedy for Niven when she died in 1946 after accidentally falling down a flight of stairs. Friends said that he never completely recovered from the shock.

Niven's second marriage was to Hjördis Genberg a Swedish fashion model, to whom he was married from 1948 until his death. They adopted two daughters but the marriage was not happy. Hjördis was an alcoholic depressive who treated Niven cruelly when his health began to fail but Niven resolutely refused to desert her.

After some good work for Walt Disney in such films as 'No Deposit, No Return' in 1976 and 'Candleshoe'in 1978, Niven settled into semi-retirement in the small village of Chateau d'Oex in Switzerland close to good friends such as actor, Roger Moore.

Niven was an ex rugby player and commando and had always enjoyed robust health. It was a shock when in 1980 he began to experience tiredness, muscle fatigue and slurring of speech. They were the first symptoms of Lou Gehrig's Disease (a variant of motor neurone disease).

Niven refused all life-support systems and continued to appear in the media although it became obvious his health was failing rapidly. His speech became slurred and in his last film 'Curse of the Pink Panther' his lines were later dubbed by his friend, impressionist Rich Little.

1932
There Goes the Bride (uncredited)

1946
A Matter of Life and Death
Magnificent Doll

1947
The Perfect Marriage
The Other Love
The Bishop's Wife

1950
The Toast of New Orleans
The Elusive Pimpernel

1954
Happy Ever After
The Love Lottery

1961
The Guns of Navarone
The Best of Enemies

1968
Prudence and the Pill
The Impossible Years

1969
The Extraordinary Seaman
The Brain
Before Winter Comes

1976
No Deposit, No Return
Murder by Death

1979
A Nightingale Sang in Berkeley Square
Escape to Athena

1982
Trail of the Pink Panther

1983
Better Late Than Never
Curse of the Pink Panther