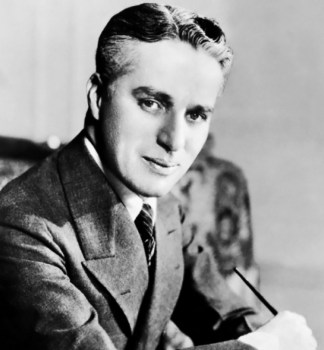 Charlie Chaplin was the brightest Hollywood star of all. His contribution to the art of cinema cannot be overestimated.

He worked in the entertainment industry with conspicuous success for almost eight decades, starting as a child performer in Victorian Music Hall in England through silent movies and the early decades of talkies, and continued almost until his death at the age of 88. His name has come down to us as the most famous and most successful silent-movie performer by far. He also founded his own studio, United Artists, with Douglas Fairbanks, Mary Pickford and D.W. Griffith, and he excelled in virtually all areas of filmmaking - he did the producing, casting, directing, writing, scoring and editing of the movies he starred in.

Above all, he gave the world The Tramp, one of the most popular and instantly identifiable icons of the twentieth century: a bowler-hatted and cane-wielding clown who wore oversize shoes and trousers and sported a moustache and brought, and still brings, laughter to millions.

In short he was an absolute genius, a genuine phenomenon.

He was born Charles Spencer Chaplin on 16 April, 1889 in Walworth, South London, England. His mother, Hannah, was an actress and his father, Charles, was a music hall singer. The family was poor and his father, an alchoholic, died when Charlie was 12. His mother was mentally ill and Charlie and his half brother, Sidney, spent their childhood in and out of charity homes, workhouses and, eventually, an orphanage. Hannah was finally committed to a mental asylum in May,1903 and lived there until Chaplin moved her to California in 1921.

Chaplin left school aged 10 and went to work on the British Music Hall circuit with an act 'The Eight Lancashire Lads'. He toured with other acts over the next eight years, always learning, and he proved to have considerable natural stage talent, with great timing and inventiveness allied to a willingness to work hard. It set him apart from the crowd and in 1910 he was chosen to go with the Fred Karno troupe to tour America. the tour lasted 2 years and after a short break back in England Chaplin returned to The Fred Karno troupe, this time meeting another young Englishman, Arthur Stanley Jefferson, who would later become better known as Stan Laurel. Stan returned to England for a short while but Chaplin stayed in America. He had seen his opportunity.

Whilst touring with Karno, Chaplin honed his comedy act of a drunk to perfection and he became extremely well known. Theaters would sell out weeks in advance. Word of this successful young comedian reached Mack Sennett of the Keystone company and Chaplin was offered a contract with Keystone. He accepted and moved to Hollywood in December, 1913.

In 1914, his first full year, he made 35 movies and in the second movie, 'Kid Auto Races at Venice', introduced a tramp character wearing baggy pants, oversize shoes, a bowler hat and a toothbrush moustache. The following year Chaplin joined Essanay Studios with a more favorable contract, and continued to develop his comedic skills, adding deeper levels to the basic Keystone-style slapstick. 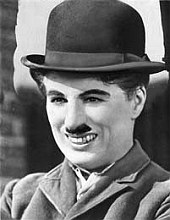 His hard work paid off and his star was rapidly rising. In 1916 he changed studios again on even more favorable terms. this time he was given near complete artistic autonomy by the Mutual Film Corporation to produce tweve two-reel comedies. The twelve films he duly produced are classics and have influenced movie makers ever since.

Chaplin balanced his tramp's slapstick routines with pathos, making his character at once funny and touching, rebellious and pitiful. By 1917, The Tramp had become the most popular movie character in the world.

Gradually Chaplin attuned his films to the mood of the times, broaching sensitive issues. 'The Immigrant' in 1917, for instance, is frank in its criticism of the treatment of immigrants by U.S. customs. The Tramp's kick to an officer's butt was not received well by conservatives in the United States, but audiences loved it.

When his Mutual contract ended in 1917, Chaplin was able to consolidate the popularity of The Tramp when he signed a contract with another studio, First National, to produce eight two-reel films with complete autonomy over the production. This gave him unparalleled freedom and time to focus on quality and to perfect his output. He built his own studio and created a number of unique, timeless masterpieces such a 'A Dog's life' in 1918, 'The Kid' in 1921, and the underrated 'The Idle Class' also in 1921.

In 1919 Chaplin continued his inexorable rise when he co-founded United Artists along with Mary Pickford, Douglas Fairbanks and D.W. Griffith. It was a logical move and gave them freedom within the increasingly stringent rules of the developing Hollywood studio system. The move guaranteed Chaplin's independence as a film-maker and in future he was able to lavish a great deal of time on each movie. While this slowed down production, it guaranteed perfection. Chaplin served on the board of United Artists until the early 1950s.

The first movie Chaplin made for United Artists was 'A Woman of Paris: A Drama of Fate' in 1923 and this was followed in 1925 by the classic 'The Gold Rush' in 1925 which Chaplin later said was the film for which he would most like to be remembered. Then, in 1927 came 'The Circus', for which he received a special Academy Award "for versatility and genius in writing, acting, directing and producing".

'City Lights' in 1931 is full of carefully choreographed gags and maintains an emotional sensitivity and tactfulness. With his next two films, 'Modern Times' in 1936 and 'The Great Dictator' in 1940, Chaplin reached his zenith. Their comedic timing, original humor, evocation of emotions through the tiniest of movements, and cinematographic skill-especially in toying with the edges of the camera frame-push the boundaries of comedy to the limit, while their depiction of class disparity and message of tolerance gave them a topical relevance. Chaplin had for 13 years resisted the use of sound, feeling that movies were essentially pantomime. 'The Great Dictator' was his first talkie, and he exploited this to the full by making The Tramp speak out loud to deliver his anti-facist message.

'The Great Dictator' was immensely successful and was nominated for five Academy Awards including Best Picture. It was Chaplin's last masterwork and he made only two more American films, 'Monsieur Verdoux' in 1947 and 'Limelight' in 1952, which also featured his longtime friend, Buster Keaton, before departing for Britain in 1952.

During the postwar period he was becoming ensnared in the anti-Communist hysteria, also known as McCarthyism that was engulfing the U.S. He was accused by the U.S. authorities of having Communist tendencies and performing "un-American activities", and his re-entry permit was revoked. FBI chief J. Edgar Hoover and the House Un-American Activities Council (HUAC), believed that he was injecting Communist propaganda into his films.

A disillusioned Chaplin made his permanent home in Vevey, Switzerland. He briefly and triumphantly returned to the United States in April 1972, with his wife, to receive an Honorary Oscar, when he received a record 5 minute standing ovation.

Chaplin's final film was 'A Countess from Hong Kong' in 1967, starring Marlon Brando. It was not commercially successful. Gradually his once-robust health deteriorated and towards the end of his life he became wheelchair bound. He died on Christmas Day, 1977 in Vevey, Switzerland. 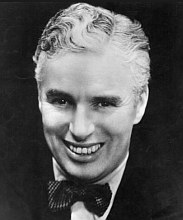 Chaplin's romantic life was colorful and varied. He had a lifelong fixation on younger women. This has been attributed to his teenage infatuation with Hetty Kelly, whom he met in Britain when he was nineteen and she fifteen and whom he never forgot.

The first of Chaplin's masterpieces was 'The Gold Rush' in 1925 and he met his second wife, Lita Grey when she sat for a screentest for it. She was 16 and he 35 when they married in 1924 and their son, Charles Spencer Chaplin was born 6 months later. The marriage lasted only two and a half years before divorce in 1927.

After the release of 'Modern Times' in 1936, Chaplin set out for the Far East accompanied by his co-star Paulette Goddard and her mother. Chaplin and Goddard were supposedly secretly married whilst on the journey but official papers of the marriage have never been seen. He was 47 and she 26. Paulette went on to make 'The Great Dictator' in 1940 with Chaplin but the marriage foundered and they divorced in 1942.

In June 1943 Chaplin married Oona O'Neill, daughter of the playwright Eugene O'Neill. He was 54 and she 17. It proved to be his only truly happy marriage. They had three sons and five daughters. Oona survived Chaplin by fourteen years. She died from cancer in 1991.

Chaplin had many love affairs outside his marriages. The first and longest was with his co-star in many of his earliest movies, Edna Purviance. They met in 1913 and although the relationship ended in 1917 they remained friends for the rest of their lives and she remained on Chaplin's payroll until her death in 1958. Her last two appearances were walk-on parts in 'Monsieur Verdoux' and 'Limelight'.

In 1942 Chaplin had brief affair with the actress Joan Barry whom he was considering for a role in a forthcoming movie. In 1943 she gave birth and filed a paternity suit against him. The Supreme Court ruled that he had to make financial provision for the child even though blood tests proved he was not the father. Chaplin's public image took a severe nosedive as a result of the publicity from the case. Joan Barry was committed as a schizophrenic to a California state hospital in 1953.

One Win:
Best Music, Original Dramatic Score ... Limelight (1952) (Shared with Ray Rasch and Larry Russell.) Note: The film was not released in Los Angeles until 1972 and the Award was presented in 1973.

1914
Making a Living
Kid Auto Races at Venice
Mabel's Strange Predicament
A Thief Catcher (uncredited)
Between Showers
Film Johnny
Tango Tangles
His Favorite Pastime
Cruel, Cruel Love
The Star Boarder
Mabel at the Wheel
Twenty Minutes of Love
Caught in a Cabaret
Caught in the Rain
A Busy Day
The Fatal Mallet
Her Friend the Bandit
The Knockout
Mabel's Busy Day
Mabel's Married Life
Laughing Gas
The Property Man
The Face on the Bar Room Floor
Recreation
The Masquerader
His New Profession
The Rounders
The New Janitor
Those Love Pangs
Dough and Dynamite
Gentlemen of Nerve
His Musical Career
His Trysting Place
Tillie's Punctured Romance
Getting Acquainted
His Prehistoric Past

1916
Police
Burlesque on Carmen
The Floorwalker
The Fireman
The Vagabond
One A.M.
The Count
The Pawnshop
Behind the Screen
The Rink

1917
Easy Street
The Cure
The Immigrant
The Adventurer

1919
The Professor
Sunnyside
A Day's Pleasure

1921
The Kid
The Nut (unconfirmed) (uncredited)
The Idle Class

1923
The Pilgrim
A Woman of Paris: A Drama of Fate

1967
A Countess from Hong Kong