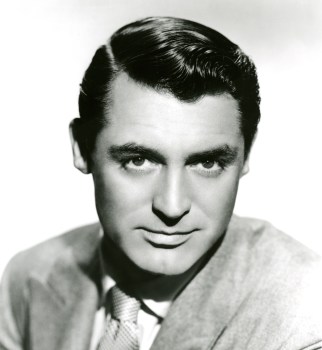 
Cary Grant is one of the legendary greats from Hollywood's Golden Age. The Cary Grant filmography charts a long and immensely successful career in which he starred in more than 70 movies, many of them classics such as 'The Philadelphia Story', 'Charade', and 'Notorious', and he was twice nominated for Oscars. He was runner up to Humphrey Bogart in The AFI's list of Greatest Male Stars of all Time.

His acting style was natural and uniquely his own. He developed a unique way of speaking resulting from his attempts to speak with an American accent, so that he wouldn't be limited to only playing British roles in Hollywood movies. His screen persona was that of a a suave, self-assured, debonair man about town, and was immensely appealing to both men and women. His good looks were an asset of course but he had great talent and had no need to depend on his looks alone. In 1970 he was presented with a special Oscar to commemorate his career, and when he died in 1986 there had been no decline in his popularity. He was and still is one of the most popular and most loved movie stars in Hollywood.

He was born Archibald Alexander Leach in January 1904 in Bristol in south west England. His family were working class in origin. His father, Elias, worked in a clothing factory and his mother, Elsie, came from a family of labourers and laundresses. Archie was an only child although his parents had had another child 4 years previously, who had died in infancy. This loss was to have a profound effect on his mother who suffered from serious depression for the rest of her life.

As a young boy Archie became fixated on the theater and cinema and went to both as often as he could. When he was 9 years old his mother was placed in a mental institution, at the request of his father. Archie was simply told that she had 'gone to the seaside' and he did not discover for almost 20 years that she was still alive, and in a mental institution.

He went to live with his father's mother whom Archie came to regard as cold and distant. Although he was a bright student and won a scholarship to the local Fairfield Grammar School, which he entered in 1915, he left after 3 years, aged 14, to pursue his growing interest in the world of show business. He forged his father's signature on a letter in order to join the Bob Pender group of stage comedians. He went on tour around England with the group for two years, learning pantomime and stage acrobatics and in 1920 he went with them to America for a long term booking in a show called 'Good Times' at the New York Hippodrome, which was then the world's largest theater. Before it closed in 1921 the troupe made a total of 455 performances and Archie had become a seasoned vaudeville performer. They began touring America but when bookings began to slow down Pender decided to return to England. Archie, however, made the decision to stay to make a stage career in America.

He was not an overnight success. For five years he scraped a living doing any jobs he could get, including society escort and working as a stilt walker on Coney Island. Then, whilst touring with former members of the Pender troupe he met Reginald Hammerstein who convinced him to try his hand at musical comedy. After taking singing lessons Archie was taken on in 1927 by Hammerstein's uncle Arthur to work on Broadway. He appeared in two musical comedies 'Golden Dawn' and 'Polly'. They were not particularly successful but they enabled him to get noticed. He was on his way and was chosen to appear in other touring light comedies such as 'Boom Boom' in 1929, 'A Wonderful Night' in 1929 and 'Rio Rita' and 'Nikki' in 1931.

The Great Depression hit the acting profession as hard as the rest of the country. Half the theaters on Broadway were forced to close and Archie now found it difficult to find work, but he was saved by the Paramount Movie Corporation who offered him a five year contract. He moved to Hollywood in January, 1932, aged 28, to start his new life, but he was not going to do it as plain Archie Leach. The studio thought he should change his name, and he was advised to keep it short. He kept the same initials as Clark Gable. Cary Grant was about to make his first appearance.

He almost immediately landed small roles in two minor films, 'This Is The Night' and 'Sinners In The Sun' and then, later in 1932, was given his first important role in 'Blonde Venus' starring Marlene Dietrich. The movie helped launch his career, and the handsome and charming young actor was soon in demand playing in a series of movies with the top Paramount female stars such as Nancy Carroll and Mae West, as well as Dietrich.

In 1935 he was loaned out to RKO and played opposite Katharine Hepburn for the first of several movies they made together, in 'Sylvia Scarlett'. The movie came out in 1936 and was a box-office failure but Grant received excellent critical reviews and his position as one of Hollywood's top young stars was secured.

On the basis of this success and because Paramount would not give him the ability to approve his scripts he decided not to renew his contract with them when his 5 years were up in 1937. Instead he started to work freelance, selecting his own projects, along with scripts and directors. In the era of big studio domination it was a decidedly risky and brave move, but one which was to pay off handsomely.

For the 3 years between 1937 and 1940, Grant was to create and hone the screen persona which he would use for the rest of his career - the charming, debonair man about town who, although unreliable, has undoubted class, and is somehow irresistible to his, usually, strong, female partner.

With his new independent status Grant featured in two moderately successful movies, Columbia's 'When You're in Love' and RKO's 'The Toast of New York' and then had his first major success in 1937 with 'Topper'. He followed this in the same year with 'The Awful Truth', another huge hit. The movie received six Academy Award but none for Grant, the only leading actor in it. RKO appreciated his box-office appeal and signed him up to make three pictures at $50,000 per movie, plus a percentage of profits.

Grant's independent status was now a financial success and it became also an artistic triumph as he had a succession of hits, each of which added a little more shine to the screen image he had created. 'Bringing Up Baby' in 1938, with Katharine Hepburn, 'Holiday' in 1938, 'Gunga Din' and 'Only Angels Have Wings' in 1939, 'His Girl Friday' 'My Favorite Wife' and 'The Philadelphia Story', all in 1940. Also in 1940, Cary appeared in 'Penny Serenade' with Irene Dunne and got a long-awaited Oscar nomination. He was now riding the crest of a wave. He had recreated his image and become a major movie star.

During this period of great success, Grant's father died, in 1935, and only then did he discover that his mother was alive, and incarcerated still in an asylum. He travelled to England and arranged for her release. Although she refused to live in America with him, Grant looked after her well and set her up in her own household near the original family home in Bristol. He financially supported her and visited her frequently until her death aged 95, in 1973.

For the remainder of his career Grant stayed at the top of his profession. His collaboration with Alfred Hitchcock was particularly fruitful with 'Suspicion' in 1941', Notorious' in 1946, 'To Catch a Thief' in 1955' and 'North by Northwest in 1959. In 1947, Cary had another box-office smash with 'The Bachelor and The Bobbysoxer' and in 1948 he starred in the screwball comedy 'I Was A Male War Bride' which became Fox's biggest hit of the year.

His run of successful movies continued well into the late 1950's and the 1960's with 'Operation Petticoat' in 1959, 'Charade' and 'Father Goose' in 1964, and 'Walk, Don't Run' in 1966. After this he announced his retirement from filmmaking, as he was about to become a father - his best production, as he called it.

Grant married five times. His first marriage in 1934 was to actress Virginia Cherrill who had played the blind flower girl in Chaplin's 'City Lights'. They were divorced within a year. He wed Woolworth heiress, Barbara Hutton in 1942. This time the marriage lasted three years, all of them stormy. The couple were nicknamed "Cash and Cary" which was unfair on Grant who by this time had a considerable fortune of his own.

His next marriage, to another actress, Betsy Drake, was much more successful and lasted thirteen years and they remained good friends even after their 1962 divorce. Three years later he married Dyan Cannon who bore him his daughter, Jennifer, which prompted his retirement from movie-making. That marriage ended in 1968 and his final marriage was to Barbara Harris in 1981, the marriage ending with his death.

After finishing with movie-making, Grant started to concentrate, very successfully, on the world of business and commerce. He became a board member of Rayette-Fabergé, a director of MGM and of Western Airlines.

In 1970 he was awarded a Special Oscar by the Academy of Motion Picture Arts and Sciences.

In 1981, Grant agreed to do a series of lecture tours entitled "An Audience With..." in which he would answer questions posed by the audience. The tours were very successful and he made 36 of them in all. He suffered a stroke in 1984 but continued to tour. It was while on tour that he he suffered a cerebral hemorrhage. Cary Grant died on November 29, 1986. He was aged 82 years.

1938
Bringing Up Baby
Free to Live

1939
Gunga Din
Only Angels Have Wings
In Name Only

1942
The Talk of the Town
Once Upon a Honeymoon

1947
The Bachelor and the Bobby-Soxer
The Bishop's Wife

1948
Mr. Blandings Builds His Dream House
Every Girl Should Be Married

1952
Room for One More
Monkey Business