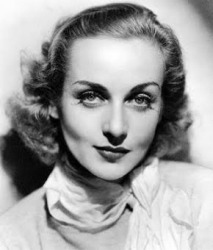 Carole Lombard was a beautiful American actress who became well known for her comedy roles in movies of the 1930's and 1940's. At the peak of her fame in the late 1930's she was the highest paid actress in Hollywood and is ranked 23rd on on the American Film Institute's list of the 50 greatest American female screen legends. She was the third wife of Clark Gable who never fully recovered from her early, tragic death in a plane crash returning from a war bond rally in 1942. She was posthumously awarded the Medal of Freedom by President Roosevelt.

She was born Jane Alice Peters in October 1908, in Fort Wayne, Indiana, the youngest of three children. Her parents divorced when she was 6, and she moved with her mother and two brothers to Los Angeles. She graduated from Fairfax High School in 1927 although she had begun her acting career well before. She had been spotted by director Allan Dwan playing in the street and he cast her at age twelve in her debut movie, 'A Perfect Crime' in 1921. This whetted her appetite for acting and she joined a theater troupe. She was eventually signed by the Fox Film Corporation and firstly under the name Jane Peters, then Carol Lombard, she appeared as the beautiful blonde in several silent films such as 'Gold and the Girl' and 'Hearts and Spurs' in 1925. She also worked as an extra in a number of silents including 'Ben-Hur: A Tale of the Christ' in 1925. She left Fox and joined Pathé appearing in some of Mack Sennett's 1928 shorts such as 'Motorboat Mamas' and 'The Campus Vamp'.

With her clear, unaffected voice, Carole's career prospects improved markedly in 1929 with the arrival of Talkies, starting with the drama 'High Voltage' in 1929, co-starring William Boyd, and she quickly made a name for herself as a first class actress, in movies such as 'The Arizona Kid' in 1930, co-starring with established actors like Warner Baxter. Also in 1930, she changed studios and began working for Paramount Pictures.

Reed-slender and ethereally beautiful, Lombard continued to appear successfully in dramatic movies during the early 1930's. She gave a good performance in 'No Man of Her Own' in 1932, a rough romance with Clark Gable, but her real gift proved to be for screwball comedy and the film which really mdae her name was 'Twentieth Century' in 1934, with John Barrymore. In the same year she made 'Bolero' , a musical drama with George Raft, and she cemented her comedic reputation in 'Hands Across the Table' the following year and again in the screwball comedy 'My Man Godfrey' in 1936, with her ex-husband William Powell, for which she was nominated for an Oscar for Best Actress.

In her next film, 'Nothing Sacred' in 1937, Carole was again cast opposite one of the top leading men of the day, Fredric March, and she was directed by top director, William A. Wellman. The movie was her only film in Technicolor and it turned out a resounding success, establishing her as one of the highest paid and best known actresses in America.

After another well received comedy, 'Fools for Scandal' in 1938 Carole turned to straighter, nearly tear-jerking romance with James Stewart in 'Made for Each Other' in 1939, and tried heavy melodrama in 'They Knew What They Wanted' in 1940. But her final roles found her happily back in comedy, as the suddenly unmarried wife in Hitchcock's 'Mr. & Mrs. Smith' in 1941 and with Jack Benny in Ernst Lubitsch's 'To Be or Not to Be' in 1941, which turned out to be her final film.

Off screen, Carole Lombard displayed an unconventional and uncompromising approach to life. Her love of parties and her less than elegant language earned her the nickname 'The Profane Angel'. In 1931 she married the urbane William Powell, 16 years her senior, and, although they divorced only 2 years later, they remained good friends for the rest of her life and worked together successfully on 'My Man Godfrey' in 1936.

After her divorce from Powell in 1934, Carole worked hard at preserving her reputation as a party girl and she had love affairs with Gary Cooper and George Raft, the screenwriter Robert Riskin and the singer Russ Columbo.

She and Clarke Gable became involved in 1936 when Gable, the number one actor in Hollywood, attended a party thrown by Lombard. They married in 1939 during a break in production of 'Gone with the Wind' and moved into a ranch in the San Fernando valley where they enjoyed a happy although tragically short married life.

Carole Lombard died in the early hours of January 16, 1942 when the plane carrying her and her mother back to California from a war bond rally crashed into a mountain peak 51 km southwest of Las Vegas. All 22 aboard, including 15 army servicemen, were killed instantly. Carole was just 33 years old. She was interred beside her mother under the name of Carole Lombard Gable at Forest Lawn Memorial Park Cemetery in Glendale, California.

Clark Gable never fully recovered from the shock of losing his wife. Although he married twice more, his wishes when he died in 1960 were to be interred beside Carole Lombard, the love of his life.

No Wins:
One Unsuccessful Nomination:
Best Actress ... My Man Godfrey (1936)

1924
Gold Heels (uncredited)
1925
Dick Turpin (uncredited)
Marriage in Transit
Gold and the Girl
Hearts and Spurs
Durand of the Bad Lands
The Plastic Age (uncredited)
Ben-Hur: A Tale of the Christ (uncredited)

1926
The Road to Glory
The Johnstown Flood (uncredited)

1930
The Arizona Kid
Safety in Numbers
Fast and Loose

1935
Rumba
Hands Across the Table

1936
Love Before Breakfast
The Princess Comes Across
My Man Godfrey

1939
Made for Each Other
In Name Only

1940
Vigil in the Night
They Knew What They Wanted