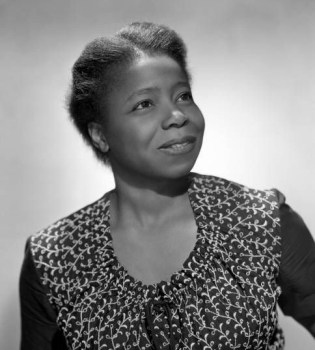 Butterfly McQueen was an American actress who brought comic timing, charisma, and a natural charm to her roles. She first appeared in films as "Prissy" in 'Gone with the Wind' in 1939. Her unusual Christian name started as a stage name due to the constant movement of her hands and arms when dancing in the Butterfly Ballet in a production of 'A Midsummer Night's Dream' in 1935. She had never liked her birth name and so legally changed it to Butterfly McQueen.

Along with Hattie McDaniel, who also starred as a maid in 'Gone with the Wind', she blazed a trail in a segregated world, a trail which other black actors have been following ever since. For decades talented African-American performers were offered stereotypical roles as menials - maid, servant, cook, nursemaid. Butterfly and Hattie were unable to attend the premiere of 'Gone with the Wind' in Atlanta because it was held at Loew’s Grand Theatre, a whites-only venue.

She was born Thelma McQueen on January 8, 1911 in Tampa, Florida. Her father was a stevedore and her mother was a maid.

Thelma attended public school in Augusta, Georgia and graduated from high school in Long Island, New York. Her first ambition was to be a nurse until a teacher advised her to use her talents to become an actress.

She studied dance with Katherine Dunham, and performed with the Venezuela Jones Negro Youth Group. Her stage debut was in "Brown Sugar," with legendary director George Abbott for whom she did several other stage shows.

Her big break came in 1938 when she was appearing in the Broadway comedy 'What a Life'. She was seen by Kay Brown, talent scout for David O. Selznick, who recommended her to audition for ' Gone With the Wind', then in pre-production. As a result she was cast as Prissy, the simple-minded, house maid.with an unforgettable squeaky voice.

The role would make Butterfly famous but she felt that the role was demeaning to African-Americans.

In 1939 she appeared, uncredited, as the shop assistant Lulu in 'The Women' which was released before 'Gone with the Wind' although filmed after it.

Other notable appearances among her string of maid parts were in 'Cabin in the Sky' in 1943, and 'Flame of Barbary Coast', 'Duel in the Sun' and 'Mildred Pierce', all in 1945.

From 1947 to 1951, Butterfly regularly performed on the radio show "Beulah" and then in the TV version 1950-52. During the 1960s she left the acting profession, working in a number of jobs including taxi dispatcher. saleswoman at Macy's, and waitress.

She returned to the entertainment world in 1969 when she appeared in an episode of 'The Dating Game'.

Butterfly was in the original version of the stage musical 'The Wiz' in 1974, playing the Queen of the Field Mice, a character from the original L. Frank Baum novel The Wonderful Wizard of Oz. However her role was cut when the show was revised before going to Broadway.

Thereafter, Butterfly made several appearances on television, playing the role of Aunt Thelma in 'The Seven Wishes of Joanna Peabody' in 1978 and 'Seven Wishes of a Rich Kid' the following year, for which she received a Daytime Emmy Award for Outstanding Individual Achievement in Children's Programming.

Her final feature film role was in 'The Mosquito Coast' in 1986 and her final acting appearance was in 1989 in the TV movie 'Polly' a reworking of 'Pollyanna' with a Black cast.

McQueen never married nor had any children. She lived in New York in the summer months and in Augusta, Georgia, during the winter.

During the 1970s when acting roles became few and far between, Butterfly became involved in political study. She received a bachelor's degree in political science from City College of New York in 1975.

In the 1980s she was awarded $60,000 after successfully suing the Greyhound Bus Lines for assault. A guard had mistaken her for a pickpocket and handled her roughly, cracking several of her ribs.She chose to live very frugally on the money and retired to a small town outside Augusta, Georgia, where she lived in anonymity in a modest one-bedroom cottage.

On the night of Dec. 22, 1995, a fire broke out in her home, and she was found by firefighters lying on the sidewalk outside with severe burns over 70 percent of her body. She said her clothes caught fire while she was trying to light a kerosene heater in her cottage, which was destroyed by the fire. She was taken to Augusta Regional Medical Center, where she died. She was aged 84. She donated her body to medical science[ and in her will made a donation to the Freedom From Religion Foundation.