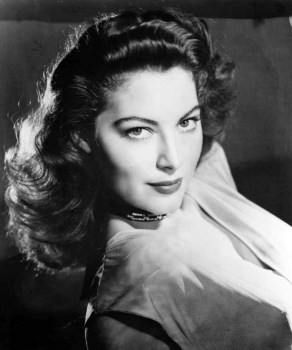 
Ava Gardner was an actress exceptionally attractive even by Hollywood standards with her brown hair and green eyes giving her a dark incandescent beauty. She was 5'6" with a figure that would rival any of today's young beauties. She stood out amongst the many other beautiful actresses in Hollywood, not only for her classical features, but also for her radiant onscreen charisma, and her vivid and complicated lifestyle offscreen with numerous wild affairs, and marriages to three extremely famous men.

Her first husband was future Hollywood legend Micky Rooney, then bandleader Artie Shaw and finally Frank Sinatra, helping to restart his faltering career and eventually leaving him heartbroken, with her memory continuing to haunt him until his dying day. She also had a tempestuous long term relationship with billionaire Howard Hughes, owner of the RKO studio and an affair with bullfighter, Luis Miguel Dominguín. But Ava Gardner's life was more than just famous lovers and husbands. She was a very talented actress and gave many accomplished performances during her 45-year career. She is remembered as one of the the most charismatic and beautiful actresses in Hollywood history.

In 1954 she received an Academy Award nomination for Best Actress for her performance in 'Mogambo' and she is listed at number 25 on the American Film Institute's list of greatest female screen legends.

She was born Ava Lavinia Gardner in Brogden, North Carolina on December 24, 1922, the youngest of seven children. Her parents were poor tobacco farmers and Ava grew up in an impoverished but happy family environment. When the children were all still young the family lost its property and had to move, first to Newport News, Virginia, and then, after the death of Ava's father in 1937, to Rock Ridge, a suburb of Wilson, North Carolina. Her mother took over the running of a teacher's boarding house in Rock Ridge.

Ava attended Rock Ridge High School and after graduation in 1939 she began a course at Atlantic Christian College in nearby Wilson, intending to train for a career as a secretary. Fate had different ideas, however, and when Ava was 18 a photograph of her taken by her brother-in-law and displayed in his New York photo studio, was seen by an MGM talent scout. This led to an invitation to a screen test for MGM head Louis B. Mayer and a seven year contract with the studio. In 1941, aged 19, Ava moved to Hollywood with her sister, Beatrice, and began her acting career.

During her early years in Hollywood Ava found difficulty in standing out from the crowd of beautiful young starlets, particularly in view of her complete lack of experience. She was helped by receiving an MGM starlet makeover to smooth her rough edges, including a voice coach to make her Carolina drawl comprehensible. Her first three years were then spent learning her new craft, playing one line walk-on parts in 'B' movies such as 'Shadow of the Thin Man' in 1941, and 'Young Ideas' and 'Swing Fever' in 1943.

She got her first credited role opposite Lionel Barrymore in '3 Men in White' in 1944. Her first substantial role was the lead in 'Whistle Stop' in 1946 and in the same year she was loaned out to Universal for her first outstanding movie, the film noir, 'The Killers', with Burt Lancaster, in which her on screen charisma shone out and marked her as a star in the making. Over the next few years she fulfilled her promise and became a fully fledged star in such films as 'The Hucksters' in 1947, 'One Touch of Venus' the following year, the musical 'Show Boat' in 1951. and 'The Snows of Kilimanjaro' in 1952 with Gregory Peck.

Ava was now being taken very seriously indeed as an international star and she was photographed by many top names. After her performance opposite Clark Gable in 'Mogambo' in 1953 earned her an Academy Award nomination for Best Actress, followed by an important role in 'The Barefoot Contessa', opposite Humphrey Bogart, she became recognised as one of the biggest stars in Hollywood.

She was also praised for her performances in 'Bhowani Junction' in 1956 and 'On the Beach' in 1959, with Gregory Peck, and in 1964 she received nominations for a BAFTA Award and a Golden Globe as well as excellent critical reviews for her performance as Maxine Faulk in 'The Night of the Iguana'.

Ava continued to appear in movies through the remainder of the 1960's, though usually in less-important roles than before, as in 'The Bible' in 1968 with George C Scott. She appeared as Miss Logan in 'The Sentinel in 1977', and as Beth Richards in 'The Kidnapping of the President ' in 1980 but in general, during the 1970's and 1980's her roles became smaller and less important as her health declined and she began to look much older than her actual age. She took on TV work, appearing in five episodes of 'Knots Landing' and her final film was a made-for-TV movie 'Harem' in 1986.

There was as much public interest in Ava's tumultuous love life as in her screen performances. Even before she became a household name she had attracted the interest of one of the biggest stars of the day, Micky Rooney, whom she had met in 1941, shortly after she arrived in Hollywood. Rooney was at the time a superstar, hero of MGM's Andy Hardy series. He fell madly in love with the young beauty and Ava was flattered by his attention. They married in January 1942 but divorced just 17 months later, due mainly to Rooney's determination to continue his roistering bachelor lifestyle.

Ava's second marriage was to jazz musician and band leader Artie Shaw, in 1945. Ava was his sixth wife (he was to be married eight times in all). Shaw tried to mould his young wife and was severely critical of her lack of formal education, to the point of being abusive. Perhaps not surprisingly the marriage foundered after just one year and it was during this period that Ava began to drink heavily.

Ava's third and final marriage, to singer and actor, Frank Sinatra, was her longest, lasting for 6 years from 1951. It was also the most stormy of her relationships. Sinatra was married to his first wife, Nancy, when he and Ava met, and Ava was pubicly heavily criticised for being a marriage wrecker. They married 72 hours after Sinatra's first marriage was legally ended. Sinatra's career was in the doldrums when they met and Ava's was very much in the ascendant. It was her influence that helped Sinatra land the role of Maggio in 'From Here to Eternity' in 1953, for which he would win an Oscar for Best Supporting Actor and which set his career back on course. Sinatra's Latin jealousy combined with Ava's heavy drinking habit created a tempestuous relationship and the couple separated in 1954 and divorced 3 years later. They each regarded the other as their one true love and they remained lifelong friends.

After the failure of her third marriage, Ave became disillusioned with Hollywood life and she moved to Spain in 1958. She was a close friend of the author Ernest Hemingway who introduced her to bullfighting. The matador Luis Miguel Dominguín, became became her lover during this time.

After 10 years in Spain Ava moved to England and lived the remainder of her life quietly in London.

She suffered two strokes which slowed her down somewhat but she did not lose her zest for life. She concluded her autobiography entitled 'Ava, My Story', but she never got to see the book in final print. Ava Gardner died in London of pneumonia on January 25, 1990. She was 67.

She was buried in the family plot in Smithfield, North Carolina. An Ava Gardner Museum is located there.

1948
One Touch of Venus
1949
The Bribe
Some of the Best
The Great Sinner
East Side, West Side

1952
Lone Star
The Snows of Kilimanjaro

1953
The Bandwagon (uncredited)
Ride, Vaquero!
Mogambo
Knights of the Round Table

1972
The Life and Times of Judge Roy Bean

1975
Permission to Kill
1976
The Blue Bird
The Cassandra Crossing

1980
The Kidnapping of the President