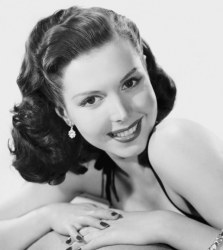 Ann Miller was an American singer, dancer and actress who starred in more than 40 Hollywood films during her career including 'Easter Parade' in 1948, with Fred Astaire and Judy Garland and 'On The Town' in 1949 with Frank Sinatra and Gene Kelly.

She was renowned for her slim figure and long dancer's legs and for the speed of her tap dancing. Studio publicity claimed she could do 500 taps per minute. As her movie career wound down in the 1950's she began a new career dancing in nightclubs and in 1979 she was in the Broadway smash hits 'Mame' and 'Sugar Babies' She also appeared on a number of television series including 'Love Boat' and she made a cult TV commercial for Great American Soup.

Ann Miller was born with the name Johnnie Lucille Ann Collier on April 12, 1923 in Chireno, Texas into a comfortably off middle class family. Her father, a lawyer, gave her the birth name Johnnie as he had wanted a boy but she was called Annie as she was growing up.

When she was three she began dancing lessons to strengthen and straighten her legs after an attack of rickets. She had found her vocation. She became known as a brilliant dancer, a child prodigy, whose early inspiration was Eleanor Powell, "the fastest tap dancer in the world." Her parents split up when Ann was nine and she and her mother moved to California.

Ann continued to take dancing lessons and began dancing professionally at the age of 11, in 1934, when she appeared as an extra in the movie 'Anne of Green Gables'. She appeared, uncredited, in the movie 'The Good Fairy' the following year and 'The Devil on Horseback' in 1936, the same year in which she was hired as a dancer in the "Club Bal Tabarin" in San Francisco, having told them she was 18. It was a fortuitous move for Ann because she was seen there by Lucille Ball who recommended her to her studio, RKO. In 1936, still incredibly, aged just 13, (and still maintaining she was 18), Ann signed a contract with the studio.

Her first film with RKO was as herself in 'New Faces of 1937' and she stayed with the studio for 4 years, playing mainly dancing roles in such films as 'The Life of the Party' and 'Stage Door', both in 1937 and 'You Can't Take It with You' and 'Room Service' in 1938.

Ann then completed a highly successful two year stint on Broadway in producer George White's musical 'Scandals of 1939'. The director, George Abbott, was impressed with the young dancer and invited her to work on the film version of Rodgers and Hart's 'Too Many Girls' in 1940', with Lucille Ball and Desi Arnaz. The film was a great success and it was the start of the big time for Ann. Later in the year she took another step up the ladder and left RKO to join Columbia.

She became in a short time of of the most popular and profitable stars in Columbia's stable, making a series of low budget wartime morale boosting movies, at first in secondary roles, as in 'Go West, Young Lady' in 1941 but then becoming one of the headline stars. In 'Reveille with Beverly in 1943, she co-starred with Frank Sinatra, together with Duke Ellington and Count Basie and then with Louis Armstrong and Jo Stafford in 'Jam Session' the following year. 'Eve Knew Her Apples' in 1945 was a musical remake of 'It Happened One Night' in which Ann sang four numbers. She was now one of Columbia's biggest stars and boss Harry Cohn wanted to move her into the major league of Hollywood superstars.

His plans came unstuck when Ann decided to get married to her boyfriend, steel millionaire Reese Milner, and announced her retirement from movie making. Cohn was not a man to cross and he sued Ann for breach of contract and won a settlement of $150,000. Ann's marriage ended in divorce after 2 years but Cohn would not take her back. Her career was put back on track by MGM who recruited her as a speciality dancer for 'The Kissing Bandit' in 1948. The film, which co-starred Frank Sinatra and Kathryn Grayson was forgettable, but her dancing was not and it earned Ann a contract with MGM, at that time the pre-eminent studio for quality musicals.

Her first movie for her new studio was 'Easter Parade' in 1948, as replacement for Cyd Charisse, who had broken her leg. She performed a romantic dance with Fred Astaire and a fast solo tap number called "Shakin' the Blues Away." Ann was flying high and she went on to do 'On the Town' in 1949, with Sinatra and Gene Kelly, and 'Kiss Me Kate' in 1953 with Kathryn Grayson and Howard Keel, each time playing important second feminine leads, but never the main feminine role. Her last musical was a dire Technicolor remake of the 1939 film 'The Women', named 'The Opposite Sex' in 1956, in which Ann was not required to dance a step. Her last movie appearance was another non-musical role in 'The Great American Pastime' in 1956.

At the end of her MGM contract in 1957 Ann went to Morocco to appear with Bob Hope entertaining the troops in 120 degree heat and singing, appropriately "Too Darn Hot."

After this Ann's film career dried up as the MGM style of extravagant musicals went out of fashion and television began to challenge the dominance of cinema, but Ann continued to work hard replacing movies with a new nightclub dancing act and appearing on stage and on television. She was a smash hit in the Broadway production of 'Mame' in 1969 and 1970 and she appeared in one of the most iconic television commercials ever made, for Great American Soup in which she tap-danced on a monster soup tin surrounded by a dancing girls and an orchestra and which ends with the line, "Why must you make such a big production out of everything?". When she was well into her 60's she had a major hit alongside Mickey Rooney with 'Sugar Babies' on Broadway and on tour for nine years. Even then she would not slow down and in 1998 she appeared in a successful revival of Stephen Sondheim's 'Follies' at the Paper Mill Playhouse in New Jersey. In 2001 to the surprise of her fans she went to work with one of the screen's most controversial directors, David Lynch, with a double role in his movie, 'Mulholland Drive'.

Ann was married 3 times, each marriage ending in divorce. Her first marriage was in 1945 to steel heir, Reese Milner. The marriage ended in 1947 after he threw Ann down some stairs when she was 8 months pregnant, breaking her back and injuring the baby. Not long after, Ann, still in a s teel harness, gave birth to her only child, Mary, who died within a few hours.

Her second marriage was in 1958 to oil millionaire William Moss and when that failed after a few months she dated another millionaire, Arthur Cameron whom she married the following year. This marriage also ended in divorce within a year. In the mid 1940's she is reputed to have had an affair with the already married head of MGM, Louis B. Mayer which ended when she refused to marry him.

Ann had a lifelong passion for the occult and believed she was the reincarnation of the Egyptian Queen Hathshepsut, which, she claimed, caused her marriages to fail.

Ann Miller wrote two autobiographies, "Miller's High Life" in 1974 and 1990's "Tapping the Force" in which she described her obsession with the occult.

Ann Miller died on January 22, 2004 from cancer. She was interred in the Holy Cross Cemetery in Culver City, California.

1936
The Devil on Horseback (uncredited)

1937
The Life of the Party
Stage Door

1942
True to the Army
Priorities on Parade

1945
Eadie Was a Lady
Eve Knew Her Apples

1956
The Opposite Sex
The Great American Pastime