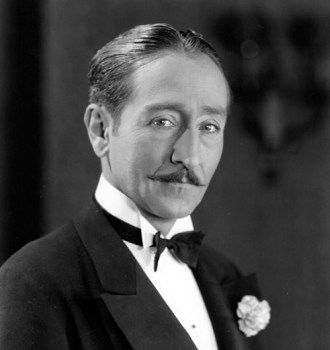 Adolphe Menjou was an American actor whose career began in the silent era and who appeared in both starring and 'supporting roles in numerous highly successful films such as 'The Sheik' in 1921, 'Stage Door' in 1937, 'State Of The Union" in 1948, and 'Paths Of Glory' in 1957.

He was famous for his sartorial elegance both on- and off-camera and for his regal bearing, often wearing a tuxedo. He was also voted America's "best dressed man" nine times.

He was born Adolphe Jean Menjou in Pittsburgh, Pennsylvania on February 18th, 1890. His father, a French immigrant, was a restaurateur and his mother was from Galway, Ireland.

He was raised as a Roman Catholic and was educated at Culver Military Academy in Indiana, and then at Cornell University where he graduated with a degree in engineering. After a short period trying to follow his father's wishes and working in the family restaurant business, he decided that a career in the food trade was not of interest and to try for a career in acting.

In 1912 he left home for New York and started a new life in the theater. He found some bit parts in the fledgling film industry and began playing supporting roles in many silent movies, such as 'The Acid Test' in 1914, 'Manhattan Madness' and 'The Kiss' in 1916 and 'The Valentine Girl' in 1917. During WWI he served in France in the American Ambulance Corps rising to the rank of captain. After the war he returned to the New York movie business working off camera as unit and productions manager. In 1920 as California began to overtake the East coast as the capital of American film production, Menjou moved west and returned to acting. He landed some starring roles in successful films such as 'The Faith Healer', 'Through the Back Door', 'The Three Musketeers' and 'The Sheik', all in 1921.

After his successes of 1921, Menjou signed a contract with Paramount, and in 1923 he played a sophisticated Frenchman, making a good job of upstaging Edna Purviance in Chaplin's 'A Woman of Paris: A Drama of Fate'. From then on his screen image was firmly set and seldom changed. During the rest of his long career, with his trademark waxy black mustache he appeared in more than 100 movies, as a sophisticated man-about-town. He was duly chosen as the classic suave matinée lead in movies such as 'Broadway After Dark' and 'Sinners in Silk' in 1924, 'The Ace of Cads' and 'A Social Celebrity' in 1926 and 'A Gentleman of Paris' in 1927.

After the stock market crash of 1930, Menjou's Paramount contract was terminated. His pleasing and strong speaking voice meant that he easily made the transition to sound. He joined the MGM studio at half his Paramount salary and his ability to speak French and Spanish fluently helped to keep him employed but from 1930 onwards he became mainly a supporting actor and was rarely offered a lead role.

After vying with Gary Cooper for the love of Marlene Dietrich in 'Morocco' in 1930 he received his sole Best Actor Oscar nomination for his performance in 'The Front Page' the following year.

The 1940s were not so golden, however. After entertaining the troops overseas during WWII and making broadcasts in a variety of different languages, he was given the meaty role of Billy Flynn opposite Ginger Rogers in 'Roxie Hart' in 1942 and he appeared in successful movies such as 'The Hucksters' in 1947 and 'State of the Union' the following year.

His last leading role was in the thriller 'The Sniper' in 1952, in which he appeared without his moustache for the first time in nearly two decades. His movie appearances steadily decreased, but from 1953 he made numerous appearances on television, including regular appearances in the 'Target' series in 1958. Menjou's last film of note was the classic anti-war picture 'Paths of Glory' in 1957.

Menjou was an unapologetic hardcore right wing Republican and in 1947 he caused his career to dip when he testified before the U.S. Government's House Committee on Un-American Activities. He was fervently anti-Communist and he proved to be quite prepared to name names to the Committee. His reputation was undoubtedly harmed and his career never fully recovered.

Menjou was married three times. His first marriage to Katherine Conn in 1920 ended in divorce. His second marriage in 1928 to actress Kathryn Carver also ended in divorce 6 years later. His third and final marriage was to Verree Teasdale, also an actress, lasted from 1934 until his death in 1963, and the couple adopted a son.

Adolphe Menjou died from hepatitis at his home in Beverley Hills on October 29th, 1963.

1914
The Acid Test (Short)
The Man Behind the Door (uncredited)

1923
The World's Applause
Bella Donna
Rupert of Hentzau
A Woman of Paris: A Drama of Fate
The Spanish Dancer

<
1925
A Kiss in the Dark
The Swan
Are Parents People?
Lost: A Wife
The King on Main Street

1928
A Night of Mystery
His Tiger Wife
His Private Life

1936
The Milky Way
Sing, Baby, Sing
Wives Never Know
One in a Million

1938
The Goldwyn Follies
Letter of Introduction
Thanks for Everything

1947
I'll Be Yours
Mr. District Attorney
The Hucksters

1949
My Dream Is Yours
Dancing in the Dark

1951
The Tall Target
Across the Wide Missouri

1956
The Ambassador's Daughter
Bundle of Joy